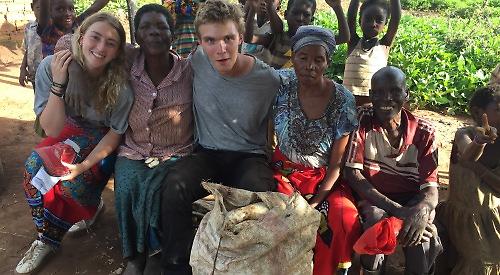 A TEENAGER has returned to the UK after spending three months in Zambia as a volunteer.

Calum Hawkes, 18, of Rufus Isaacs Road, Caversham, was helping to raise awareness and offer education on reproductive health, including lessening the spread of HIV.

He stayed with a host family — the Ng’ambis — and worked in the country’s Samfya district as a volunteer with the International Citizen Service, a government-subsidised scheme which is part of UK Aid.

Calum’s team specialised in health, dealing with issues such as AIDS and tropical diseases as well as dispelling superstition, taboo, and pseudoscience.

He said: “Within the team of ICS volunteers, I was assigned to work with the Planned Parenthood Association of Zambia with four other fellow volunteers.

“My team and I peer educated in schools, clinics, and rural communities — most of which were isolated and ill-educated — about a number of health issues, as well as debunking local superstitions about traditional medicine.

“We always encouraged people to seek professional palliative care. In addition, we also peer-educated about the dangers of the HIV/AIDS pandemic in Africa, the steps to avoid transmission and discussing this taboo topic with adolescents who did not wholly understand the graveness of contracting the disease.”

Calum said he enjoyed living there, although it did have its challenges.

He said: “Samfya is a gorgeous place to live, and sits on Lake Bangweulu. The lake is usually alive with fishing boats, but a countrywide fishing ban had been implemented during our stay.

“Power outages were commonplace, especially at night, and the state energy company, Zesco, was extremely unreliable.

“In the early evening, clouds begin to gather as the humidity falls, and flashes of lightning on the horizon could be seen almost every night.” As part of the trip, Calum worked in three schools and is hoping to link one of them with a school in the Berkshire/Oxfordshire area.

He explained: “The potential for positive cultural exchange is surmountable, and I envision not only pen-pals, and the trading of letters and photos, but also ideas, traditions and a shared history.

“I believe a correspondence between a local English school and Kasoma Bangweulu would have many far-reaching advantages for all parties involved, and the idea has the support of my local MP, Matt Rodda.

“Overall, I thoroughly enjoyed the experience and would recommend volunteering abroad to anyone willing to undertake gruelling, but fulfilling work overseas.

“ICS is a brilliant way to broaden one’s horizons, and a fantastic addition, not only to one’s CV, but also in demonstrating leadership qualities, teamwork, and commitment to a really great cause.” The Government paid for his trip but Calum raised almost £1,700 for international development charity Voluntary Service Overseas.

The teenager, who is on a gap year and lives with his parents Gavin and Margaret, signed up for the scheme in August after completing his A-levels at The Henley College.

He is now looking into applying to the Winston Churchill Memorial Trust for a fellowship, which funds UK citizens to travel overseas, and hopes to go on and study law.