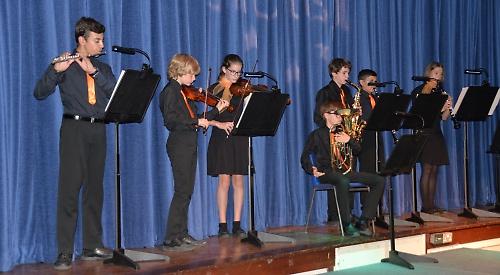 SINGERS and musicians at Gillotts School in Henley showcased their talents at a summer concert.

It featured 24 performances from pupils in years 7 to 10 who performed a range of solos and duets of covers as well as their own compositions.

The Gillotts Chamber Group played a selection of music from Harry Potter films and Summertime by George Gershwin, while the Gillotts Voices performed Rhythm of Life by Cy Coleman and So Strong by Labi Siffre.

Lauren Leach-Scrivens performed her own jazz improvisation on the piano while Ellie Whittle and Lauren Perks sang Viva La Vida by Coldplay. Natasha Bryant gave a solo performance of Dancing on My Own by Calum Scott and Georg Gudjohnsen-Mitchell sang Mercy by Shawn Mendes.

Other performances included a duet by Lois Powell and Ella Wood of Mr Moon, their own composition, while Eddie Pratt sang Back in the USSR by The Beatles.

The evening, held on Thursday last week, finished with an ensemble performance of Shut Up and Dance by Walk the Moon.

Frances David, head of performing arts at the school, said: “I think that it was a bigger success than any of us could have ever imagined.”