Signs put up to encourage drivers to switch off engines 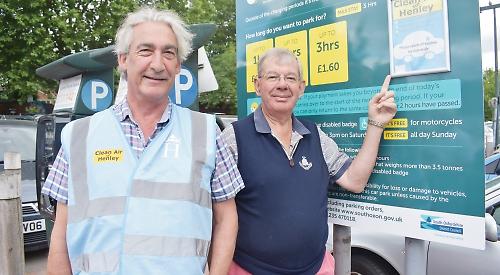 SIGNS have been installed at two public car parks in Henley to warn drivers against leaving the engine running, writes David White.

They are affixed to boards at the payment machines in Greys Road and King’s Road car parks, which are owned by South Oxfordshire District Council, at the request of a campaign group.

This is the latest measure by Clean Air for Henley to reduce the levels of pollution in the town centre.

David Dickie, of St Katherine’s Road, who has been leading the campaign, said: “The clean air notices clearly displayed at all payment noticeboards serve as a reminder that air pollution can be noticeably reduced by behaviour change.

“Sitting in your car with the engine idling is an antisocial behaviour that should be discouraged by notices and the general public themselves.”

Ramsey Adams, another member of Clean Air for Henley, said that research shows that many drivers are unnecessarily idling through habit in the car parks.

Mr Adams, who lives in Ravenscroft Road, added: “Clean Air for Henley is aiming to reduce unnecessary pollution in our local area and we are in the process of formulating our plans to nudge and educate local drivers to the dangers of car pollution for the locals and especially smaller children.”

Clean Air for Henley is part of environmental campaign group Henley in Transition and has received funding from Henley Town Council. The group says air pollution in Henley is becoming worse and levels of nitrogen dioxide regularly exceed Air Quality England’s target limit of 40 micrograms per cubic metre in parts of the town.

The town council’s own transport strategy group has been investigating measures to improve the town’s air quality in the town, such as introducing a 20mph zone for the town centre, more cycling and walking routes, planting more trees and having more electric car charging points.

The council has also agreed a deal for a new bus service from Reading Buses using a vehicle powered by biomethane gas.