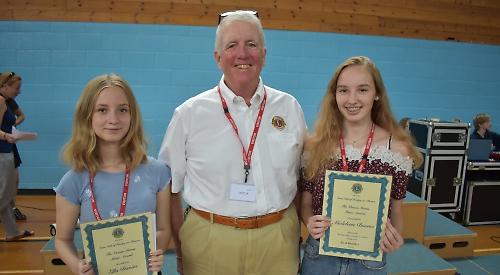 TWO young musicians have been presented with an award by the Henley Lions Club.

Ella Davies and Madeleine Bourne, who are both 16, were presented with certificates and £100 each at the Gillotts School awards ceremony on the last day of term.

The girls, who have just left the school ready to study A-levels, said they were delighted to be recognised.

They were put forward for the award, which was presented by Lion David Murray in front of the whole school last Friday, by the school’s music department.

Both girls were music captains whilst they were in year 11, took music at GCSE and were part of the school’s choir — the Gillotts Voices — guiding and leading the younger pupils and setting a good example.

They also sang a number of duets throughout the school year, most notably starting the carol service at St Mary’s Church in December and singing a duet alongside a dance piece in the Gillotts Spectacular, a showcase for the performing arts held earlier this year.

It is the 13th year the Lions have made the award to a pupil or pupils at the school, which is named after former member Vivian Morris who died in 2013 at the age of 82.

Ella, who lives in Caversham and plans to study A-levels at The Piggott School in Wargrave, plays the piano, drums and guitar and sings.

She said: “I feel really happy and honoured to receive this award. I’ve been musical my whole life.

“I started playing drums when I was little and the piano when I was 11. I would like to do performing arts and singing in the future and I’m doing music at A-level.”

Ella added: “Music at Gillotts had really helped boost my confidence. I’ve done a lot of performances here and that’s helped me when in front of lots of people so I’m really grateful to our head of performing arts Frances David.”

Madeleine, from Shiplake, plays the ukulele, guitar and piano and sings but also wants to learn the cello and plans to put her £100 towards one.

She said: “I was speechless — it’s just amazing. I feel honoured to get it. I did lots of musical stuff when I was tiny and I started playing the piano and the guitar when I was seven years old.

“I got a real confidence boost when I was in the Gillotts Voices and performing with everyone.”

She now plans to study A-levels at either Piggott or Sir William Borlase’s Grammar School in Marlow.

Music teacher Geoff Bull said: “It’s just a credit to the work they have put in. They have encouraged students and mentored them and been there as a role model and trying to make arts stand out from the academic subjects.

“Music at Gillotts is just growing and growing in strength and the quality of musicians we get coming through.”

Mr Murray, who is secretary of the Henley group, added: “Everything we do is supporting the people of Henley and this is supporting the young. The girls are very worthy recipients. This event is so positive and I think we’re just so lucky to have Gillotts in Henley.”

For 10 years the award was given in the name of Lion Ronald Gilbert and for the following three it has been presented in the name of Mr Morris, one of its founder members.