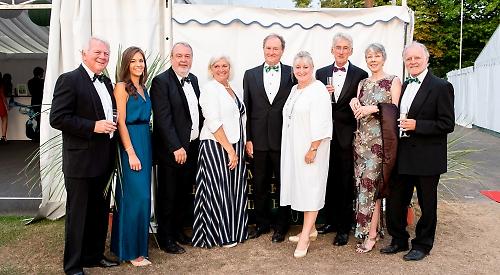 The 13th annual event saw 280 guests enjoy champagne and canapés on the regatta lawns on the bank of the River Thames followed by a two-course dinner by caterer Emily Rait.

The evening raised £20,000 which means the club can pay off the remainder of a £200,000 loan from Henley Town Council which allowed it to buy its ground from Brakspear.

Sue Laing, a vice-president at the club and chairwoman of its ball committee, said: “It was absolutely fantastic — we broke all attendance records by a long way. We had a target of raising £15,000 to pay off the loan for the ground purchase and we raised at least £20,000 and it’s still going.

“It’s been a huge achievement by a lot of people over 10 years to raise the money. As an evening we had players, parents of players and friends and family which was great. I really love the evening because it’s so cross-generational.”

Music was provided by band The Scoundrels and there was also a photo booth and caricaturist, who produced a picture of the club’s first team which will hang in the clubhouse in addition to a raffle, auction and silent auction.