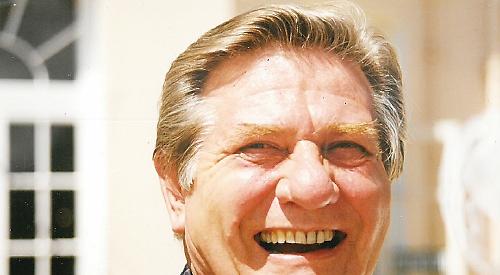 Keith started as a salesman with the company and began a rise which saw him taking the reins of their entire European operation. During his tenure Hallmark became one of Henley’s largest employers.

Keith was born in pre-war Chelsea. It is perhaps hard to imagine now but parts of Chelsea  were afflicted by terrible poverty in the Thirties.

Keith’s family faced real deprivation but his father was determined that his sons would succeed. The Second World War saw Keith evacuated to Bray where he lived with a local poacher and his wife. Although his hosts were kind Keith developed a London lad’s aversion to animals that stayed with him for life.

People, and particularly family, were Keith’s passion. Back in London, he survived a Luftwaffe bomb attack that killed many of his classmates and left his family homeless.

Keith was tough and determined but also immensely kind. He rose through Hallmark not by stepping on others’ backs but by encouraging a spirit of communal endeavour.

An inspiring figure, he was tall and well built with a wry sense of humour that never left him even when he became so ill in his final years. Keith battled bravely with a heart condition. He lost count of the number of heart operations he had after 15.

As a young man Keith married his beloved wife, Daphne. A marriage that was to last 63 years. To the end they would hold hands whenever they could.

Keith is survived by Daphne, his three sons — Gary, Rob and Graham — plus eight grandchildren and a great granddaughter. His funeral will be held at Caversham Crematorium at 1pm on August 1. Donations to Sue Ryder at whealstop@aol.com