Cricketers bowled over by their caricatures 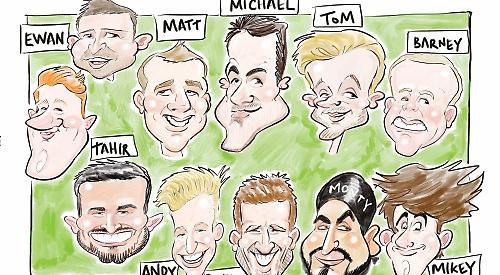 The first XI have been depicted as caricatures in a sketch created by artist Sheba Cassini, from Twickenham.

Seven players sat for her in the marquee during the club’s summer ball last month and she used photos of the other four who couldn’t be there to complete the montage.

At least some of the players are delighted with how they have been depicted. Skipper Michael Roberts says: “I think it’s absolutely hilarious. A few of the guys have come off better than others!

“The pictures all look very similar but some people’s features have been pronounced a bit more than they might have liked.

“David Barnes has received quite a bit of torment but Euan Brock’s caricature is the absolute spitting image of him. I’m sure the players would like to get copies.”

Opening bowler Tom Nugent say: “Some of them actually look a lot like the people. I don’t think mine looks that much like me.

“A lot of people have said I’ve got too much hair! The guys are always saying I’ve got a receding hairline, which is not true!

“Everyone on there has got apretty big forehead. It’s quite funny — it’s a good bit of fun and I’m sure it will get a few laughs.

“We should probably get a sketch done every year to see how we’ve changed.”