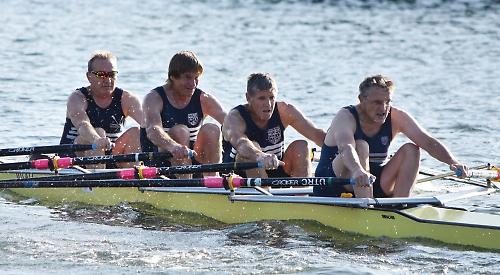 UPPER Thames and Henley Rowing Club clocked up eight wins between them at this year’s Town and Visitors’ Regatta.

Entries from 200 crews ranged from elite to novice and from junior to masters in a wide range of racing boats.

The club triumphed again against Abingdon with same verdict in the masters open F doubles — a composite crew with Shiplake Vikings Rowing Club.

Henley Rowing Club claimed wins in an all club final of the open band 1 doubles where brothers Euan and Bruce Turnell beat brothers Sam and Will Hayes easily.

The single and double sculling events attracted the largest entries to the regatta.

The open single sculls entry was divided into five bands in order to provide close races between scullers of similar ability. For the first time the British Rowing ranking points index was used to achieve this.

The fastest race of the day was the final of the alumni eights in which Blue Star Club (Newcastle University) beat Nemesis Boat Club (University of Manchester) by a length-and-a-half in a time of two minutes 43 seconds. This was Blue Star Club’s fourth consecutive win in this event.

The closest race of the day was a heat of the open eights, between Vesta Rowing Club and Stratford-upon-Avon Boat Club which resulted in a dead heat. The race was re-rowed over the full course and won by Stratford, eventual winners of this premier event, by just three-quarters of a length.

The Victor Ludorum and winner of the Peter Sutherland Challenge Cup was won this year by Marlow Rowing Club with 14 points, with Reading Rowing Club second on 12 and Wolfson College third on nine. Last year it was won by Upper Thames, whose founder the cup is named after.

Mr Sutherland’s son Justin, the club’s director of rowing, said he was pleased with this year’s performance.

He told the Henley Standard: “It’s a bit of fun Henley Town and Visitors’ to be honest. It’s a fun, local regatta, it’s good to get involved with and it’s much less competitive than we’re normally used to with more high-profile events. The founding aim of Upper Thames was to try and provide a base on the upper reaches of the Thames to challenge the bigger clubs in London on the tideway.

“The original aim was to get the best people from Marlow, Reading, Maidenhead and the surrounding area to achieve that so I’m sure my father wouldn’t begrudge the individual clubs getting back something for their hard work.” Sutherland said the club was one of the leading masters rowing clubs in the world winning the Victor Ludorum at the World Masters in Bled at the beginning of the season with solid performances at the European Championships in Munich.

Regatta president Guin Batten said: “It has been a fantastic regatta showcasing the best of Henley both on and off the water.”

Regatta chairman Martin Levy added: “I would like to thank all the committee,
volunteers, subscribers, sponsors and spectators who all help to make the regatta a success and help us to keep our entry fees down.

“In particular, I would like to thank the younger junior members of Henley Rowing Club who man the stakeboats at the start and had to contend with very hot conditions.”