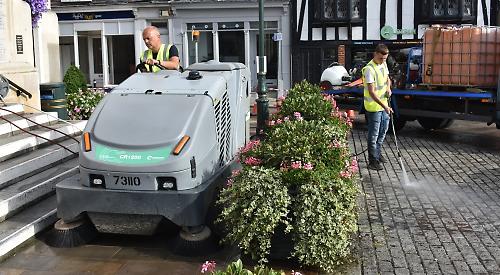 A SHOPKEEPER says more needs to be done to keep Henley’s pavements clean.

Sandie Harrow, who runs Stock in Bell Street, a gift and homeware shop, has started a petition calling for improvements, saying the state of the pavements after Henley Royal Regatta was the “final straw”.

About 100 people have signed it, including customers and other retailers such as Boots, W H Smith and Anthony Paul Jewellery, which are all in Bell Street.

On Saturday a two-week deep clean of the town centre pavements began.

This is on top of the ordinary cleans carried out by South Oxfordshire District Council once a year.

Mrs Harrow says much more needs to be done and has called for deep cleans once or twice a month.

She said: “I’m not satisfied — they have got to prove they are going to do this on a regular basis. The town deserves it.

“Henley is an absolutely Georgian gem and it should be looked after.

“I don’t think the council has given it the attention that it should have done over the past few years. Generally speaking, the pavements in the centre of the town are disgusting. Personally, I bleach the pavement outside our shop to try and keep it clean, so they can’t say, ‘why aren’t you doing it?’

“Everyone who has been into the shop has signed the petition. People have said, ‘wow, this really needs to be done’.

“This has been going on for years, it’s not just the dry period for two months and regatta.”

Mrs Harrow said she had spoken to several managers at the Waitrose store over the past three years in an attempt to have the pavement approaching the store off Bell Street cleaned.

She said: “It’s completely disgusting walking up their pathway, getting a trolley, wheeling it through dog grime and then into the place where we buy our food and pushing it all around the supermarket.”

Councillors were given a demonstration of a ride-on street cleaner by supplier Nilfisk, of Penrith, in Falaise Square last week.

However, they decided it was not powerful enough as it left some stains behind so they will look at a more advanced model later in the summer.

They have already had a demonstration of a pushable unit which also failed to make the grade.

But Mrs Harrow said: “Why is it later in the summer? Another two months will go by. They have got to get on and do it.”

Dream Cleaners, which is run by Jason Dwyer, from Henley, is spending two weeks cleaning the town centre with ride-on cleaners and two pressure washers. The work includes Bell Street down to the town mini-roundabouts, Duke Street down to Station Road, New Street and Thames Side, part of Friday Street and Greys Road up to the entrance of the car park.

Town manager Helen Barnett said: “We would love to do it on a monthly basis and if Sandie would like to rally the support of the other retailers we would be delighted but we can’t fund it.

“The council does not receive the business rates that they pay. We had to get special dispensation to do this clean.

“In an ideal world we would do it every week because we want Henley to be sparkling but that’s just not financially viable.”

Councillor Stefan Gawrysiak said: “My view is that the deep clean should happen three times a year.

“The funding has been agreed for three cleans. We have got Jason as the first one and we have got enough money to do another one in September.

“We are a prestigious town and we have tourists coming here and it’s a priority that we have the streets absolutely clean.