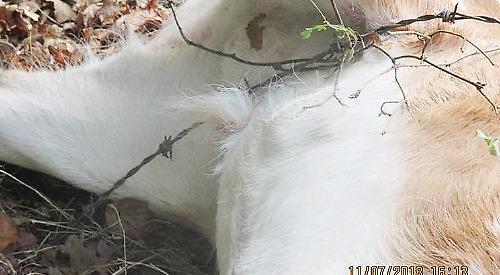 A WOMAN has repeated her call for barbed wire fencing to be banned after the deaths of two deer in separate incidents.

Judy Dinsdale says a stag died after becoming caught in some fencing in Lambridge Wood in Henley.

She made the discovery only four months after an identical incident near Greys Court.

The latest incident happened on July 11 as she was walking her dog in the woods. She helped rescue the stag but it had to be put to sleep due to its injuries.

Ms Dinsdale, of Northfield End, Henley, said: “For the second time in four months, while walking my dog, I have come across a deer impaled on barbed wire.

“On the first occasion the deer was already dead, impaled upside down, with one of its hind hoofs trapped in double-stranded barbed wire.

“On this occasion a stag was trapped on barbed wire with its neck twisted. Unable to free itself, it lay on the ground trapped on the barbed wire.

“When I found it, it was just alive, tormented by flies, and very still, patiently waiting to die.”

She called the Veterinary Centre in Reading Road, Henley, and vet Kenny Sherwood was sent to the scene.

Mr Sherwood said: “I took all the relevant medication with me as, based on previous experiences, they can be in such a bad way that they have to be euthanised on the spot.

“This deer had tried to run through this barbed wire fence and got the wire stuck in-between its back legs. Judging from the animal’s condition it had been there a while.

“The antlers were all lacerated and the animal itself was exhausted and had a lot of trouble lifting its head up and was breathing deeply.

“The only reason it hadn’t done more damage was because it was completely exhausted.”

The vet managed to cut the barbed wire between the stag’s legs to free it and tried to help it stand while Rebecca Smyth, another dog walker, brought a bottle of water from her car.

Mr Sherwood said: “Rebecca had a bottle of water and we got about three-quarters of that in.

“Using its antlers. I tried to get the deer on its feet but unfortunately it was just too weak. It was probably about 60 to 80 kilos so trying to back him out when he was thrashing was impossible.”

Ms Dinsdale said: “The stag drank all the water and as a result began to revive, although the vet was unable to get it to stand up. Weakened by its ordeal, it kept collapsing.”

A volunteer from St Tiggywinkles wildlife hospital in Aylesbury who had been called brought a stretcher and he and the vet eventually managed to put the deer on it.

Mr Sherwood said: “His willingness to help and his experience were brilliant. I would say from the moment of me arriving to us stretchering the deer off was probably an hour to an hour and 20 minutes.”

Ms Dinsdale added: “It was incredibly difficult to get a large stag on to the stretcher and then have to haul it over a high stile.

“All this took place over three hours in the middle of the morning in intense heat.

“They made a decision that it wasn’t able to stand on its own feet so there was no point in keeping it alive and it was put to sleep.”

Ms Dinsdale said the stag’s death was “another victory” for barbed wire when there were plenty of cost- effective alternatives available. “It has no place in society,” she added.

In March, she discovered a deer in a double-strand barbed wire fence at Broadplat Woods and complained to the National Trust.

The trust said the paddocks surrounding Greys Court were grazed by tenant farmers who used stock fencing to contain cattle and barbed wire or electrified fencing, which were needed to deter the cattle from leaning on a fence and damaging it.

It added: “Stock fencing can also deter deer from entering and damaging sensitive woodland. The overpopulation of deer is an increasing problem in the Chilterns as they like to eat ground flora and the shoots of young trees.

“This can interfere with the natural succession of new growth necessary for a healthy woodland, which has a knock-on effect for the wood’s ecosystem and all the wildlife which lives there.”

Mr Sherwood said his practice had to deal with horses and dogs as well as deer wounded by barbed wire.

“Personally I can’t see the point of having barbs on wires. Clean wires will do just as good a job. They would certainly reduce the amount of injuries.”