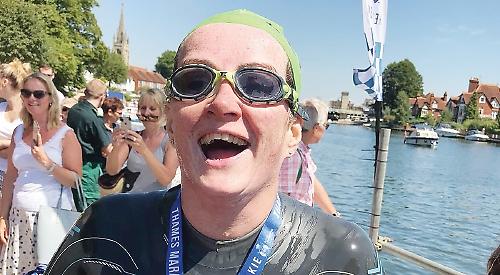 A WOMAN from Henley will complete a charity challenge to swim 100km in 100 days tomorrow (Saturday).

Joan Fennelly, 52, has taken part in all four Henley Swim events this summer as well as joining friends from the Henley Open Water Swimming Club for early morning or evening dips to stay on track.

She is raising money for Kidasha, a charity which provides protection, education and healthcare to disadvantaged and vulnerable children in Nepal.

Mrs Fennelly, a sales director who lives in Makins Road with her partner Martin Rhodes, said: “It will feel fantastic to reach 100km on Saturday and my other half will be quite relieved — he’s a patient man!”

She took up open water swimming two years ago after being challenged by her 10-year-old niece to get fit and swim a mile.

Mrs Fennelly, who grew up in Ireland, said: “Sue Brownlow, one of my best friends, had been trying to get me into it for quite a while and after a drink or two I found myself in a wet suit.”

After swimming casually with frefriends, she took part in last year’s Henley Classic, Club to Pub and Henley Mile events. She used this to raise about £1,700 for the Sue Ryder hospice in Nettlebed after losing her sister Mary to cancer in 2013 at the age of 50.

Mrs Fennelly said: “When she was in hospital a drinks trolley came round and guests and patients could have whatever they wanted so I thought, ‘perhaps I can raise enough money to sponsor the drinks trolley for a year’.”

She decided to have some proper coaching and then began training, which improved her swimming.

Mrs Fennelly said: “It was quite frustrating and you think ‘am I ever going to get this’ but I kept with it.

“Once I’d cracked the technique — the rhythm and breathing — I was able to rack up the distances.” This year, she decided to take on the 100km in 100 days challenge in aid of a less well-known charity and chose Kidasha.

“Having heard many stories about children and young women that have been supported by Kidasha’s great work, I decided it would be a very worthy beneficiary of whatever I could raise.”

She began her challenge in June, swimming at Shepperton Lake, near Staines, on Saturday mornings.

Then she realised that in order to reach her target she needed to do more so she joined the swimming club and completed many short swims.

Mrs Fennelly said: “I meet with them very early in the morning or after work.

“I do anything from a couple of kilometres to an 8km swim from Marsh Lock to Shiplake and back.”

She took part in the Henley Classic, Club to Pub and Henley Mile events again as well as completing the 14km Thames Marathon from Henley Bridge to Marlow Bridge earlier this month.

Mrs Fennelly said: “My timing chip kept falling off my ankle, which was a distraction, and I lost about 10 minutes faffing about with my leg up on a canoe trying to get it sorted.

“Despite the troubled start, I managed to catch up with two of my swim buddies from the club and the three of us finished together in five hours and 50 minutes, so I was very happy.”

This week, she has been knocking off the final few kilometres before she joins friends to complete the challenge tomorrow.

Mrs Fennelly said: “It has been a spectacularly beautiful summer with the weather.

“My job is quite pressurised and the phone rings non-stop so the moment you get into the water you’re at one with nature.

“No one can nag you, you can have a chat and a laugh with people you’re swimming with and you feel invigorated afterwards.

“The Thames Marathon seemed to captivate a lot of people and a lot of funds came in after that.

“My friend Janice Miller and her husband, who run Kidasha, were supporting me on land. They were more wrecked with the heat than I was in the water!

“I felt absolutely fine after it and slept well that night. In the main I’ve absolutely loved the whole summer — it has been amazing.”

Mrs Miller said: “I’m extremely grateful to Joan for taking on this fantastic challenge to help Kidasha. Everyone at the charity is behind her.”