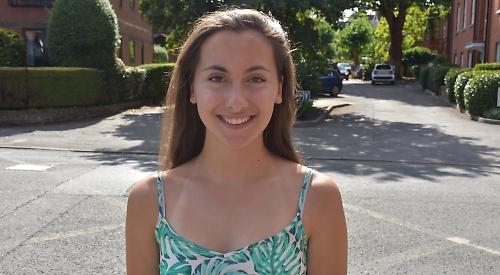 A TEENAGER from Henley is hoping to become a professional singer after making her debut performing opera.

And now the 15-year-old has appeared on stage with Garsington Opera’s youth company.

She played a maid in a production of Eliza and the Swans, an update of Hans Christian Andersen’s Wild Swans, a magical tale of a young princess who has to rescue her brothers from an evil queen.

Ellie’s contribution is all the more impressive as she only sang classical music for the first time last Christmas with an impromptu performance for her parents, Lee, an electrician, and Hannah, an administrator, in the kitchen of their home in Russells Water.

She was a young girl when she developed a love of musicals, particularly The Sound of Music and Mary Poppins.

Ellie, who attends Gillotts School in Henley with her brother Tom 13, says: “I watched them all the time and then I thought I’d have a go at singing them.

“There was a music club at my primary school in Nettlebed and I can remember thinking, ‘I’d really like to give that a go’.

“I began playing the piano just as I started at Gillotts and 18 months ago I joined the Henley Youth Choir.

“I was really enjoying it and in December last year I decided that I’d maybe try singing classical. I sang for mum and dad in the kitchen on Christmas Day.”

Her mother, who works at the Bell Surgery in Henley, said: “We were shocked and then realised it was something she really wanted to do and looked into lessons.

“We had heard Ellie singing in her bedroom but this was the first time properly — it was a surprise.

“It has developed in such a short period of time and we’re really proud. It’s nice to see her doing something she enjoys so much.” Since then the soprano has performed at the Henley Youth Festival and sang Ave Maria in winter recitals in Wallingford at the request of Henley concert pianist Anita D’Attellis.

Ellie has also joined her school choir, Gillotts Voices, and performed in front of the whole school on the final day of last term.

She says: “When I sing, it’s just the best feeling and I love to sing for people whatever the reaction. As long as I’m singing, I’m happy.

“What I enjoy the most is finding new ways to express yourself.

“When I was younger I was interested in ballet. I can’t dance but I really enjoyed the music.”

In March she began taking singing lessons with teacher Richard Burkhard and also succesSfully auditioned for the opera production at the Wormsley Estate.

She played a maid who cares for Eliza as a baby and when the princess grows up she tells her about her upbringing.

Ellie was encouraged to audition by Mr Burkhard and her family.

“I was quite nervous because I’d never done an audition like that before,” she says.

In June she passed her grade five singing exam with the Associated Board of the Royal Schools of Music and now wants to study music at
A-level in the hope that it will lead to a career on the stage.

Ellie says: “If a year ago someone had said ‘you’ll be singing opera’ I would have laughed!”