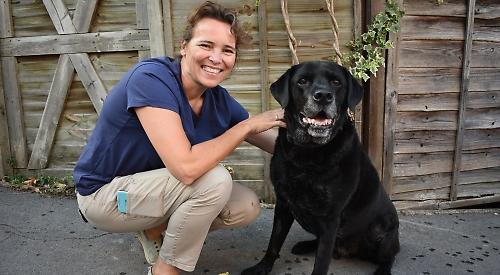 A WOMAN has warned dog owners to be vigilant after her Labrador almost died from toxic shock.

Brenda Nearchou told how
10-year-old Duke vomited repeatedly, had several fits and went temporarily blind less than an hour after playing in the River Thames.

Mrs Nearchou, 53, from Henley, who had been swimming in the river with her son Zac, 17, says the dramatic reaction may have been caused by blue-green algae, which can be fatal to dogs.

Duke has since made a full recovery but his owner has urged others to look out for the symptoms and to take their pet to a vet as quickly as possible if they become unwell in similar circumstances. Mrs Nearchou and Zac went swimming in the river between Marsh Lock and Shiplake and Duke was jumping in and out of the water from the bank.

She said: “We were in the water probably about 20 minutes and then we came out, got dried off and Duke was having a lovely time.”

They walked back to the Mill Lane car park and were picked up by Mrs Nearchou’s husband Nick before driving to the Little Angel for dinner. The family sat outside but Mrs Nearchou noticed that Duke couldn’t settle.

She said: “He kept standing up. He wouldn’t lie down and was looking at me very peculiarly.”

Mrs Nearchou took Duke for a walk in Remenham Lane but he was sick three times in quick succession.

She said: “I thought he’d drunk too much river water or been in the water too much but he looked very unsettled — he didn’t look very happy at all.”

Mrs Nearchou, who works in research and administration at financial advisers Milton
Gordon & Co in Hart Street, Henley, was returning to the pub when Duke had a fit.

She said: “The first one was very scary. He leaned back on his haunches and shut his eyes and started shaking uncontrollably.

“I talked to him and I was stroking him and said ‘come on, let’s get back to the car’ and I knew I had to get him to the vets as soon as possible.

“As we walked, he had a couple more fits and he couldn’t walk. It was almost like he’d seen something terrifying, all the while shutting his eyes and cowering.”

She managed to reach the pub car park and signalled to her husband and son.

Mr Nearchou lifted Duke into the boot of his Audi estate as he was unable to jump in, while Mrs Nearchou climbed in and comforted him.

The dog continued to have fits almost continuously.

Mrs Nearchou said: “It was almost like he was going into a seizure that he wasn’t going to come out of.

“I phoned my daughter Alex who had the 24-hour emergency number of the Henley Veterinary Centre in Reading Road. She sent me the number and I spoke to the vets who said, ‘bring him in’.”

Fortunately, vet Charlotte Matthews was able to see Duke almost immediately. He was laid down on the floor and covered in cold towels in an attempt to lower his temperature and given oxygen.

Mrs Nearchou said: “By this time he was hyperventilating. They shaved his front right leg and took bloods and also got a drip into his other leg as quickly as possible. He was given diazepam to stop him fitting.

“The vet then asked me ‘has he always been blind?’ and I said ‘no’. She then said ‘he can’t see at the moment’ and that was really frightening. I feared the worst at that point. She said his brain had too much to cope with so his sight had stopped.”

During the next hour the drug took effect and Duke started to make a recovery.

Mrs Nearchou said: “He slowly calmed down and started breathing better. It was very, very scary — we really did think we were going to lose him.” Duke was soon was able to eat some food and stayed at the centre overnight for observation before being allowed home the following afternoon.

Mrs Nearchou said: “We spent the weekend looking after him and cuddling him. As far as he was concerned, he was back to normal. He just had these two little shaved bits on his front paws!

“We were hugely relieved and so grateful that we have such a fantastic veterinary service around the corner.

“I really do believe if we had been 10 or 15 minutes later we might not have had this outcome. Dogs are so precious and so innocent.”

Mrs Nearchou has been told Duke’s illness was most likely caused by toxic shock caused by blue-green algae which can develop in water due to hot weather and lack of rainfall.

She added: “Fingers crossed this has no long-lasting effects. My daughter phoned the Environment Agency and they have had no reports of blue-green algae.

“They came and did tests at seven inlets around that area which were negative but they said it’s very fast-moving and as a bacterium it can hide in the reeds.

“So please, please, do be careful, and if you notice any strange behaviour in your dog after a dip in the river, or especially in any standing water, take them as soon as possible to your nearest vet.

“I would also like to thank the Veterinary Centre for being open at 9pm on a Friday evening, for handling my hysterical gabblings so professionally when we arrived and, most importantly, for being so effective, efficient and kind when dealing with such a large dog, who was obviously in pain, hugely upset and disorientated, and fixing him, as it were.

“We can’t thank you enough.”

Veterinary surgeon Erik D’Arcy-Donnelly, who observed Duke, said: “There definitely was a toxicity as it was very quick and he had been swimming.

“Normally it’s going to be in water that’s not flowing but it can go to the edges of rivers where dogs go in. There’s more of a chance in this hot weather. The dog can have blue-green algae on its coat and it can lick it.”

He urged owners whose pets presented similar symptoms to contact a vet urgently.