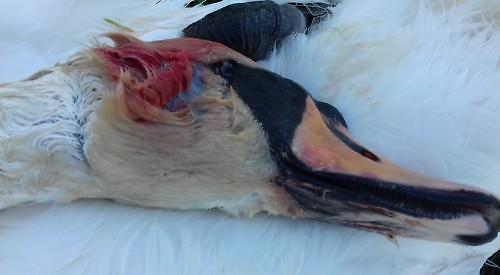 A SWAN found dead in the River Thames near Henley was shot twice in the head.

The female, which was part of a breeding pair, was tagged at last year’s Swan Upping count along with her six cygnets but was discovered on Tuesday afternoon.

Members of the public alerted Swan Support, a rescue and rehabilitation centre in Datchet, after spotting the bird floating in the river near Henley Business School at about 4pm.

Wendy Hermon, the charity’s operations director, said two rescuers were sent to the scene and used a boat to recover the bird from the middle of the river.

She said: “You could see straight away as soon as they lifted it out of the water that it had been shot in the head. It looked like an airgun pellet.

“It was twice as sad for us because the swan had also suffered by having fishing line wrapped around its leg like a tourniquet.”

Mrs Hermon believed the bird had been killed in the 24 hours prior to the discovery. She said: “I just think it’s disgusting and it’s got to stop. I don’t see what the point is — it’s in a public area, you have got rowers there, what’s going on?

“It’s probably someone from the land taking pop shots and the sad thing is it’s one of a breeding pair. I remember that family because we put rings on them. It hits home more because you know them and that ring gives you the history of that bird which makes it even more sad.”

The swan was taken back to the organisation’s headquarters and it will be disposed of at a pet crematorium. Mrs Hermon said Swan Support had campaigned for a law to be introduced requiring people to have licences for air weapons.

David Barber, the Queen’s swan marker, leads the official count of swans on the River Thames each year.

He described the killing as “horrific” and an act of “pure vandalism”.

Mr Barber told the Henley Standard: “The poor old swan with fishing line around its leg, which was cutting into it and had been there for quite a bit of time must have gone through horrific pain which is absolutely disgusting.

“What is also horrific is that there are people going around with guns and shooting on the River Thames.

“I do deal with issues like this on a daily basis and we’re talking Crown birds here — they belong to the Crown and naturally if we do find the culprit for this they will be prosecuted without a doubt for damaging Crown property. “Henley hasn’t been too bad so I hope we’re not going to have a spate of this in the near future otherwise we’re going to run into serious problems.

“The cygnet count this year was already low compared with last year and we don’t want to lose the swans. We want to stamp it out and we will.”

Mr Barber, who lives in Henley, said the pair had lost all six cygnets, most likely because of natural predators and added: “It is a shame because it’s another breeding pair which has disappeared — swans really do mate for life.”

As well as being protected by the Crown it is also an offence to injure, take or kill a wild swan as they are protected under the Wildlife and Countryside Act 1981.

Mrs Hermon is urging anyone with information to call her on 07968 868172 or the Thames Valley Police non-emergency number 101.