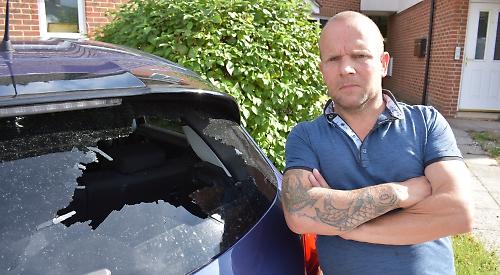 A POSTMAN whose car was vandalised in the middle of the day believes he was the victim of a targeted attack.

Gary Mallows, 51, says the rear window of his Peugeot 208 was smashed with a rock between 2pm and 3pm on Thursday last week while parked outside his home in Watermans Road, Henley.

The rock was left in the boot with glass strewn across the front and rear seats and nothing had been stolen.

Mr Mallows was dropped off by two work colleagues from the Royal Mail depot in Reading Road at about 2pm and said his car, which is only two years old, was fine when he arrived home.

He said: “I came in after a day’s work and it definitely wasn’t done at 2pm because I walked right past my car.”

Bu his wife Carolyn, who arrived home shortly afterwards at about 3pm from her cleaning job, spotted the damage.

Mrs Mallows said: “I came home and I was stood outside the house and I said ‘Gary, the back windscreen is broken’. That’s when we noticed it. We have no reason whatsoever for anyone to do anything like that.”

Mr Mallows first thought it could have been caused by children fooling around but now believes that it might have been done deliberately.

He said: “My car was the only one in the street that was damaged. It was parked in the middle of our road, as opposed to near the entrance and so it feels as if it’s been targeted.

“There’s a rock in the boot of the car and also there’s damage to the seat where it hit it — it was done with force. It’s not as if it’s flown off the back of a lorry going around a bend. It was deliberately launched.”

He added: “It’s anger and frustration because it’s a crime that you don’t expect to happen. To find a rock in the boot of your car for no reason, I felt frustration at first but now it’s anger and shock. The rear windscreen will have to be replaced.”

The Mallows have lived in the road for two years and have never had any problems with vandalism before but now they are worried it could escalate.

Mr Mallows said: “If they have done that, what’s next? What lengths could they go to? I could understand if it was a stone off the road — it does happen — but this was done with force.”

The couple have had the car, a lease vehicle, from new and reported the incident to Thames Valley Police immediately.

He explained: “I’ve now got to ring up the leasing company, Zenith, for them to fit a new screen. It’s a matter of thinking ‘are they going to do it again?’

“I use the car to go and see family in Woodley, to go shopping and as a runaround.”

Mr Mallows claims it took him about 20 minutes to get through to the police operator and he was not very impressed with the response he received.

He explains: “I was asked if there was any CCTV or any witnesses and when I said ‘no’ they said they couldn’t take any further action apart from giving me a crime reference number for insurance purposes. I was not very happy with this as I thought they would have come out and seen me.

“I’m quite streetwise and things like these don’t upset me much but for some individuals they are going to feel like a victim of crime and it’s going to affect them in a way in that they are not going to feel safe.”

He is urging any witnesses to come forward and added: “I’m considering putting CCTV up as result of this because it’s the way forward now. When you say to the police you’ve got CCTV they flock to you.”

A police spokesman said: “We would not discuss individual grievances via the media. However, if the victim would like to discuss the matter he can contact the force.”

Anyone with information should call the police on 101 quoting reference number 43180251724.