Artist faces no action for lighting up bridge 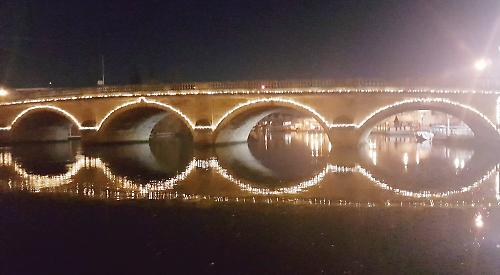 AN artist who glued electric lights on Henley Bridge without permission is likely to face no further action.

Clive Hemsley, who lives in Hart Street, has heard nothing in recent months from Oxfordshire County Council, which owns the Grade I listed structure, nor South Oxfordshire District Council, the planning authority, after they ordered him to remove them in the spring.

He attached the lights with help from river operator Hobbs of Henley at the end of February and switched them on during the first week of March.

The scheme, which comprises two strings of 800 white LED lights and is powered by a socket at the Angel on the Bridge pub in Thames Side, was widely praised on social media and more than 2,400 people signed a petition to keep them.

The councils said they weren’t against it in principle but it should have got planning permission first. They sent several demands to remove them by letter and telephone but Mr Hemsley said he couldn’t at the time as river conditions had become unsafe.

Henley Town Council is monitoring the situation and members had suggested that the scheme could stay in place until the end of the busy season to gauge its impact. The authority is also researching other ways of lighting the bridge.

Mr Hemsley said: “I think we’re still in the period where the town council is assessing how successful the lights have been.

“I would imagine the district and county councils are holding back for the time being to see what kind of feedback it gets. All I know is that I haven’t heard from anyone in a while and I’m not in jail yet!”

Mr Hemsley is also a step closer to launching a similar project at Marlow’s Grade I listed suspension bridge, which he was invited to do by the town’s mayor Jocelyn Towns several months ago.

Buckinghamshire County Council has agreed the idea in principle as long as it can approve the design and Wycombe District Council and the Royal Borough of Windsor and Maidenhead award planning permission.

Mr Hemsley intends to highlight the bridge arches using larger “festoon” lights that hang from an overhead cable and hopes they will be in place by the end of the year.