Fenn and Lawrence progress to last 16 of national finals 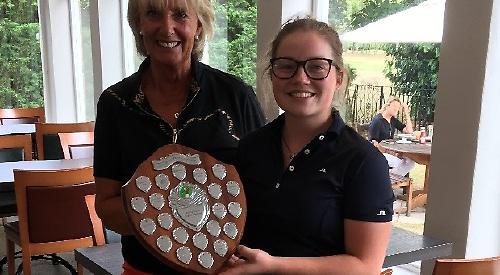 Appalling conditions were reflected in the low scores and Adrian Rayner weathered the storm best to win the trophy with a score of plus three against the course.

The runner-up was Chris Pyatt, who was a hole back, which in turn was a hole better than Paul Sherwood and Andrew Shard.

The extra medal was won by Alan Wilson with a net 67, which was two shots better than runner-up John Mitchell.

The ladies held their monthly medal in conjunction with the Rouquette Cup, resulting in a win for Sally Woolven in the top division with a net 71 on countback from Sarah Hillas. Maggi Buffin and Muriel Quinsac were close behind with a net 74.

Division 2 was claimed by Caroline Archibald with a net 65, which was six shots better than Ngairey Palin and Valeska Maclachlan.

The winner of the cup, however, came in Division 3 where Caroline Thomas recorded another 65 to pip Archibald on the countback rule.

Anne Kennedy and Val Foster were seven shots behind the winner with net 72, whilst Pat Melling and Anne Richards fought a good fight in Division 4 where Melling prevailed on countback when both players recorded a net 68. Mary-Jane Crerer was third with a level par net 70.

The Junior Presidents Day also took place, which was won by Oscar Rait in Division 1 with 36 Stableford points from runner-up Angus Harris-White on countback. Fergus Heggie was third with 35 points.

Division 2, played over eight holes, was won by Freya Petrie with a score of 12 points on countback from Lucy Hucker.

Meanwhile, two of the club’s members are in the national finals of the Daily Mail Foursomes knock-out competition, regarded as the greatest amateur golfing event in the world.

Former captain Richard Fenn and his partner Dave Lawrence have battled their way through seven matches to reach the finals to be played at the St Pierre golf resort in Wales from October 14 to 16.

Their latest win came away at Hendon Golf Club in North London where they beat the home side representatives who were the lowest handicappers left in the competition.

Out of more than 2,100 national pairs entered from golf clubs all over the UK, Fenn and Lawrence have progressed through to the last 16.

Meanwhile, at Badgemore Park Golf Club, Millie Anderson has again won the Ladies’ Club Championship, which was played over two days, giving her a new handicap of three.

At Caversham Heath Golf Club, there were points galore in the August weekend Stableford with the top six players in Division 3 all scoring 40-plus points.

Division 3 winner was Adam Baker with 45 points, halves of 22 and 23 points. Runner-up was Matthew Thomas on countback from Andy Ward, both with 43 points.

Beresford recorded 11 pars and two birdies, Walker had 13 pars and one birdie, Peart, 10 pars and three birdies, while McGiveron had nine pars, two birdies and a nil return on his back nine.

Division 2 winner was Wayne Mayers with 49 points, even halves of 20 point. Second was Neil McAllister with 39 points and third was Richard Norris with 38 points.

Norris was in prime position to win the division standing on the 16th tee, but then had a nil return, birdie and bogey finish.

Twos were recorded by Michael Deignan on the 13th hole and Richard Norris and Robert Thomas, both on the 17th hole.

Callum Peart won the Midweek Medal on August 22 with a net 68. Runner-up was Wayne Mayers with a net 69 and third was Lee Kirton, on countback from Duncan Mee, both with a net 70. Peart’s scorecard included 12 pars, two birdies and an eagle on the par five 15th hole.

Division 2 winner was Garfield Bryant with a net 65, comprising seven pars and one birdie. Second was Keith Reid with a net 68 and third was Stuart Walker with a net 70.

Twos were recorded by Shiv Dev Datt at the eighth hole and Daniel Dover, 13th hole.

Andy Horn triumphed in a nine-hole Stableford on August 24 on countback from Richard Usher and Dan Rawlings, all with 19 points.

Meanwhile, Margaret Deighan took the honours in the Amber Rose Bowl with 35 points, on countback from Joyce Collins, both with 35 points.

Deighan and Collins both had three nil returns on their scorecard, but Collins’ nil returns came within the last four holes. Third was Jane Weller on countback from Lorraine Wong, both with 32 points.