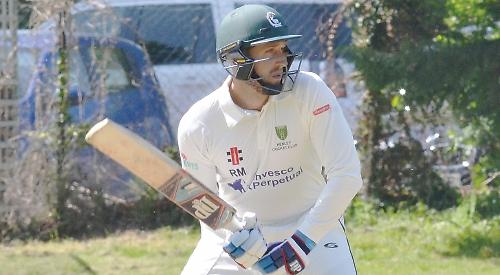 HENLEY is in pole position to take back-to-back Home Counties League titles after comfortably beating SLOUGH to go six points clear of them with one game still to play.

Tomorrow (Saturday) they face Tring Park where victory would hand them a seventh championship, equalling High Wycombe’s record, and three titles in a row, something no other club has achieved in this league.

Henley won the toss and elected to bat on a wicket which skipper Tom Nugent correctly adjudged would only become more difficult to bat on as the day proceeded.

Jack Davies was an early casualty, caught behind, but the combination of Matt Rowe and Euan Woods moved seamlessly from early watchfulness to regular destructiveness, bringing up the first 100 for Henley.

Spin was then called for and Ali Akbar Raja bowled Woods off his pads in the 25th over.

Skipper Zaheer Sher then replaced Slough’s overseas player Shahid Yousaf and the two spinners combined well to remove Rowe and slow the run rate. But Richard Morris, who replaced Woods, refused to be pinned down and took the game to the Slough bowlers, with a regular medley of boundaries, including successive sixes off Sulaiman Akhtar in the 38th over that went for 22 runs.

Yousaf returned for three overs to bowl Andrew Rishton and, later in the piece, have Morris caught at long-on by Sher.

But, by then, the damage had been done and Henley were well north of 200 thanks to a swashbuckling 78 runs by Morris.

Once again, there was a useful contribution from Euan Brock and Tahir Afridi and David Barnes brought all their experience and guile to bear to add an unbeaten 28 runs, which, along with 22 extras, produced an unassailable total of 254 runs.

In Conrad Louth, Slough are possessed of an all-or-nothing batter and this week, it was the latter, as the left-arm fast-medium pace of Afridi deceived him in the second over.

The game was effectively won and lost in the first 10 overs during which Slough managed just 13 runs, seemingly mesmerised by Afridi and Nugent.

Woods, replacing Afridi, had D Akhtar caught at fly slip off a leading edge by Nugent running round from slip and Gurveer Singh engineered the prized wicket of Yousaf, luring him down the track for a fine stumping by Davies. Yousaf departed kicking himself and in the absence of Fahim Qureshi, three of Slough’s key batsmen were back in the hutch with just 54 runs on the board in 19 overs.

Patternott was now joined by Sher and the pair did their best to claw Slough back into the game. But a swing and a miss accounted for the Slough skipper and Patternott was undone by an in-ducker in Rishton’s first over making it 123-6.

Some defiant resistance from Haroon and Noor apart, the game slowly petered out as wickets fell and the required run rate became evermore vertical.

The returning Afridi cleaned up the tail, having Noor caught in the deep by Rishton and Nawaz at cover by Morris to bring down the curtain in the last over, the home side a distant second by 54 runs, the result never really in doubt from early on in Slough’s innings.