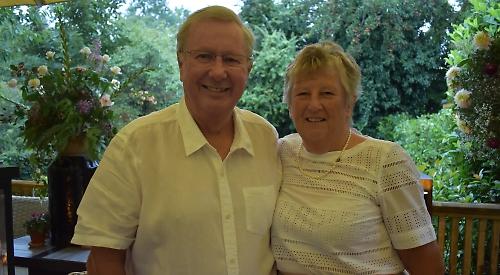 A COUPLE from Kingwood have celebrated their golden wedding anniversary.

Ian and Ann Thomas held a party for 80 friends at the Greyhound pub-restaurant in Peppard on Sunday.

They then had lunch with their four children, Alison, Lesley, Alasdair and Michael, and seven grandchildren, at the Square restaurant in Henley on Monday.

The couple met when they were 18 and studying at the Liverpool Institute, which ran partner grammar schools for boys and girls. Mr Thomas went on to study civil engineering at the University of Manchester and Mrs Thomas trained as a nurse. They married in Liverpool on August 24, 1968 and then moved to Glasgow where Mr Thomas began his career as a civil engineer and Mrs Thomas worked in the city’s children’s hospital until they started a family.

The couple stayed in Scotland for 14 years before moving to Hare Hatch, near Wargrave, in 1981 as Mr Thomas was working abroad more and it made his travelling easier.

He was awarded an OBE for services to British business in south-east Asia in 2006 and the couple moved to Kingwood in 2007. Mrs Thomas served as a magistrate in Berkshire for 10 years until 2016.

Mr Thomas is a former captain of Henley Golf Club and Mrs Thomas is the current ladies’ captain.

Her chosen charity for the year is the Chiltern Centre for disabled children in Henley and she asked guests at the party to make a donation and raised more than £1,000.

Asked the secret of a happy marriage, Mrs Thomas said: “We have common interests, tolerance and we just both love each other.”

• For more party photos, see Picture This in next week’s Henley Standard.