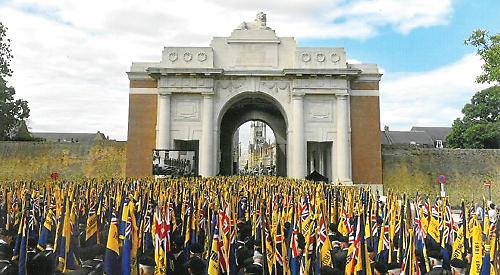 A MAN and his grandson travelled to Belgium to commemorate the centenary of the end of the First World War.

John Green, 82, from Maidensgrove, was accompanied by 17-year-old Edward Bloomer at the Great Pilgrimage, a special parade and wreath-laying ceremony which was held at the Menin Gate Memorial in Ypres, where some of the fiercest fighting took place.

Mr Green, who is chairman of the Henley and Peppard branch of the Royal British Legion, was among the 1,100 standard bearers present while Edward, a student at The Henley College, was one of 1,100 wreath-layers.

Before the ceremony, the pair travelled by coach to Lille in northern France which they used as a base for two days of visits to war memorials and cemeteries in the area including Hill 60, Tyne Cot, Vimy and Delville Wood.

They then went to Ypres for the assembly of Legion members and dignitaries who had come from around the world.

Mr Green said: “It was one of the assembly areas during the war for those that were going to march up through the Menin Gate to Passchendaele.

“We were literally following in the footsteps of those who had gone before.

“It was a very emotional experience realising that all those years before many passed through this gate but not many returned.

“Being in step with all these hundreds of people behind the bands, you felt as if you could march forever.

“One of the highlights was having my grandson Edward with me.

“His words were ‘we have learned a lot about this at school but when you stand in places where so many died and were remembered it brings it home’.

“One felt that the torch of remembrance was being passed down the generations.”

Mr Green added: “Edward also found the march along the cobbled stones of Ypres was difficult in lightweight suede shoes!”

After marching about 1km to the Menin Gate, a ceremony was held where all the wreaths were laid. Edward laid his on behalf of Henley.

There were readings, poetry and the Last Post and Reveille were sounded before the parade marched back through the gate and returned to their assembly point.

This year marks 90 years since the first Great Pilgrimage of 1928, when 11,000 war veterans and widows visited the battlefields in France and Belgium.

Mr Green added: “I was mainly thinking about my late father because a number of the sites we visited in the first two days he had actually fought at. It was very moving.”