Volunteers help clean up behind theatre for VIP area 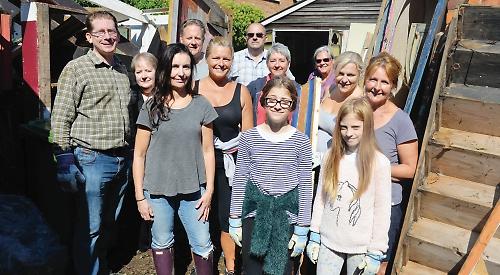 A GROUP of volunteers gave the garden at the Kenton Theatre in Henley a much-needed overhaul.

The area behind the New Street venue had not been tidied in years and was piled high with old props and had become overgrown.

The volunteers, who included the Mayor Glen Lambert, worked for seven hours on Saturday tidying up. Kenton manager Paula Price-Davies, who helped, said: “It was an absolute mess out there, completely overgrown, so it was fantastic that everybody turned up with gardening equipment.

“Glen was up on the roof cutting down all the overhanging trees and bushes. The area is a hidden gem — it could be gorgeous out there and that’s what we’re aiming for rather than it being a complete eyesore.

“I think ultimately we can have it as an outdoor seating area for visiting artists and VIPs and we’re looking at getting Henley in Bloom involved to do some planting. I think it has got lots of potential.”

Mrs Price-Davies said the old wood was donated to the Sue Ryder hospice at Nettlebed for the bonfire at its Halloween Spooktacular Fireworks Night on October 27, while the non-wood items were taken to the tip.