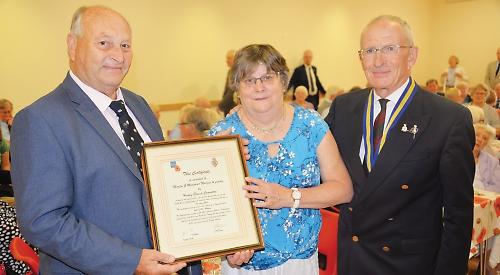 A STANDARD bearer from Henley has been recognised for his contribution to the Oxfordshire branch of the Royal British Legion.

Brian Hughes, who carried the county’s standard for 11 years, was presented with a certificate by branch chairwoman Lynda Atkins in front of 50 people at the Christ Church Centre in Henley.

Mr Hughes, 86, who was also the standard bearer for the Henley and Peppard branch of the Legion for 17 years, said: “I feel very proud.

“It’s a challenge to be able to do a good job of carrying the standard and it was honour to carry the county’s. It’s also a good way to meet fellow service people.”

Mr Hughes, who lives in Harpsden Road, took part in Henley’s Remembrance Sunday parade every year and has also been part of 80 repatriation parades.

He said: “We would all move into the middle of the road and the hearses would come by and tears were coming down my cheeks, I couldn’t stop it. At the time I thought ‘that could easily have been me there’.”

Mrs Atkins called Mr Hughes a credit to the Legion. She said: “He has done such a huge amount for the Royal British Legion in Henley and more broadly. He turned out in all weathers to all events.”

In 2010 he was awarded the Legion’s Gold Badge in recognition of his service. He said: “The certificate will have to fight for a place with the other ones!”

Mr Hughes started work in 1947 at Hammants of Henley and stayed there for 50 years, minus his National Service period from 1950 to 1952.

He was conscripted into the Royal Army Service Corps and served in the Suez Canal zone with the Royal Electrical and Mechanical Engineers, for which he earned the GSM medal. He started collecting for the Poppy Appeal in 1995 and has raised more than £60,000.

A certificate was also presented to Martin and Margaret Morgan, who run the Black Horse pub in Checkendon, by the Henley branch committee for hosting a party in July to mark the centenary of the end of the First World War.