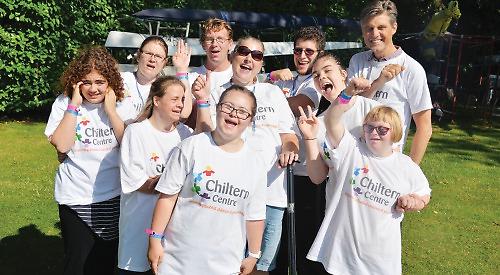 THE ninth annual Henley Regatta for the Disabled has been hailed the best ever.

More than 800 people visited the paddock of Phyllis Court Club, off Marlow Road, for fun on and off the River Thames.

The regatta was opened once again by Henley MP John Howell, who then commentated on the first three races of the day.

He also tested out his rowing skills on an ergo alongside his constituency business manager Angie Paterson.

Ten teams of disabled and able-bodied people took part in bell boat races throughout the day, paddling between Henley Bridge and the private members’ club.

The winning crew was Saving Private Goddard and the runners-up were from the Bird in Hand pub in Greys Road.

The best improvers were the Chiltern Buddies, a team from the Chiltern Centre for disabled children, off Greys Road.

Visitors could take trips on the river in the cruiser Rivertime, which is wheelchair accessible, and in two smaller boats provided by Hobbs of Henley.

Other attractions included Millars Ark Animals, a climbing wall with a hoist, rowing machines, craft stalls and side shows.

Mr Pooley said: “It was a great success — the best year we have had as everything came together and the sunshine helped.

“Everybody had a very good time and we had lots of compliments. We got 306 people on the river and this included 16 in wheelchairs. We had 50 members of the rock choir present and Sam Brown came along with her ukulele group, which added to the festivities.”

Mr Pooley said the ergos were among the most popular attractions.

He said: “We had two ordinary machines and one with an adaptive seat for disabled people — and they were going flat out all day.”

Mr Pooley, who has now stepped down from his three-year stint as chairman, said: “The regatta gives disabled people a chance to experience different and interactive activities.

“It shows that the river is accessible for all and it’s an event in Henley that we hope to carry on forever. It involves the town, which is wonderful and it was very rewarding to be chairman.”

He said he wanted to thank the patrons, members of his committee, including Hugh Legh, who provided the sound, the sponsors, volunteers, the Rivertime Boat Trust, Hobbs of Henley, Phyllis Court Club for hosting the event, the Shanly Foundation and other local organisations and individuals who donated money.

Mr Howell said: “I’ve been involved with the regatta for the disabled since it was founded. I’ve been along each year and opened it and in many years I’ve also helped commentate, as I did on Saturday. I think it’s really important to show that the river belongs to us all. I’m always impressed with the facilities that are available for the disabled at the regatta.

“It was not my first experience on an ergo but I only do it at this event, so I’m a bit out of practice. There have been no bad lasting effects and maybe I lost a few pounds!”

Next year’s regatta will be held on Saturday, August 31.