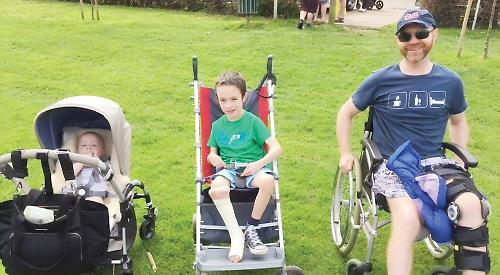 A WOMAN gave her partner the surprise of his life when she renovated their Henley home in secret as he recovered from a major skiing injury.

John Jackson fractured and dislocated his left kneecap and tore the ligaments after he hit a snowdrift during a family holiday in France.

He was sent flying 10ft into the air and also broke his left thigh, shin and ankle bones and damaged the soft tissue in his right knee.

The 44-year-old could not return to the house he shares in Harpsden Road, Henley, with his partner Charlotte Fairweather because he couldn’t put any weight on either leg for several months and their property has no downstairs bedroom or toilet.

Instead, the couple temporarily moved in with her parents Paul and Angie in Rotherfield Greys together with their sons, Samuel, seven, and Arthur, one.

But while Mr Jackson had two operations at the John Radcliffe Hospital in Oxford and underwent a course of physiotherapy, his partner secretly pressed ahead with the refurbishment of the ground floor of their home which they had discussed before the accident in April.

Dr Fairweather, 36, a doctor for the England women’s rugby team, had two internal walls demolished to create an open-plan living space between the lounge, kitchen and internal porch.

Contractors laid new floorboards, installed a log-burning fireplace and fitted kitchen, repainted the walls, installed new electrical fittings and levelled the entire floor as well as the paths to the front and back gardens.

They also cut back overgrown vegetation at the back of the house, laid a new patio and installed an outbuilding to serve as either a studio office or a playroom.

The work began in June and Dr Fairweather was able to keep it a secret until her partner came home on Thursday last week.

The children stayed with their grandparents over the weekend and had their first glimpse of the property when the Henley Standard visited on Tuesday.

Mr Jackson said: “After Charlotte had driven me back home, the first thing I wondered was why there was dust on the front door. Then she opened it and I asked ‘where has the porch gone?’.

“I’m not one for being lost for words but as it dawned on me what she’d done I just couldn’t think of anything to say. It looked so amazing that I had a hard time taking it all in and considering everything I’ve been through over the past few months, this is probably the best surprise of my life.

“She did an amazing job of keeping it secret and I’m sure MI5 will be recruiting her soon! I could tell she was up to something over the summer but she’s very into her ‘upcycling’ and I assumed it was just another project.

“When she said she had something to show me, I thought it was just going to be a framed picture she’d been meaning to finish for ages.

“I almost couldn’t believe it but I know how great Charlotte is at juggling projects so she was more than capable of pulling this off. Last year she was running up and down the touchline with the England rugby girls while she was 30 weeks pregnant. She had to carry on working full-time and look after two children while I was totally out of action, which would have been enough for most people. You definitely can’t say she doesn’t like a challenge!”

Dr Fairweather grew up in Rotherfield Greys and attended Rupert House School in Henley before going to school in Wokingham. She met Mr Jackson, a physiotherapist from Salford, while they were working at a hospital in Wales in 2006 and later began a relationship.

The couple moved to Henley in 2016 to be nearer Dr Fairweather’s parents and the following year Mr Jackson left his job as clinical lead for the Welsh women’s football team to work as a physio at the Active VIII clinic in West Lane, Henley. If his recovery continues, he should return to work in about two months.

Mr Jackson’s accident happened on April 4, when the couple were about halfway through a month’s skiing at Tignes with their children and several members of their extended family.

Two days beforehand Samuel, who has cerebral palsy affecting his right side, had broken his right shinbone after losing his balance and falling over at the foot of a slope. He was in plaster up to his thigh so was being looked after by relatives at the family’s rented flat.

Mr Jackson, who was a novice, and Dr Fairweather were making their way down an easy “blue run” near the village of Val Claret when there was a heavy snowstorm, which reduced visibility dramatically.

As Mr Jackson hit the drift, the ski on his left leg rotated and forced his kneecap out of position, twisting it by almost 180 degrees.

He flipped several times in mid-air and heard a loud crunch as he hit the ground.

He recalled: “It was pretty harrowing for Charlotte because she saw everything but all I remember is stopping dead and, in a split second, looking down at my knee and thinking ‘ooh, that’s not good it’s pretty much the wrong way round’. I was in a huge amount of pain.”

His partner said: “It was horrendous and my first worry was a spinal injury, which could be life-changing, because of how hard he came down.”

Mr Jackson’s brother Ian called the mountain rescue service, whose teams dragged him down the mountain strapped to a board which was then loaded on to a sled.

He was taken to hospital at a nearby town, where he underwent surgery to reattach and reset his knee and was discharged three days later. However, he needed more operations and the family decided to continue his treatment in the UK.

Dr Fairweather drove him and the children 15 hours home via the Euro Tunnel then straight to the accident and emergency department at the John Radcliffe.

She said: “Samuel’s accident was bad enough but with John injured and me having a young baby it was a nightmare. It was no mean feat getting someone with two busted legs into a car.”

Doctors said Samuel just needed time for his fracture to heal but Mr Jackson’s injury was more complicated. He had his first knee operation in May and keyhole surgery to clear debris from the joint a month later.

He is now awaiting a date for a third operation on his right knee and further scans to ensure his left leg is healing as it should.

Samuel returned to school after a few weeks off and his cast came off in June. His injury lengthened his shin bone, which has improved his mobility slightly.

In the first month or so after the accident, Mr Jackson was confined to a wheelchair and used a walking frame to get in and out of bed.

To limit muscle wastage, he used a device which electrically stimulated them. More recently, he has been walking short distances and carrying out light exercises to strengthen the limb.

He said: “The recovery period is very tough because sometimes you’re not making the gains you hoped for and at one point I was actually going backwards from pushing myself too hard.

“Sometimes having that medical knowledge put you at a disadvantage as you get anxious if your recovery doesn’t appear to be going properly.”

The building project was supervised by Paxton Gibbons, of Valley Road, Henley, while most of the day-to-work was carried out by builders Diogenes and Diego Gil, two brothers who work in the area. The outdoor elements were built by Ecoscape, of Stoke Row.

The house was uninhabitable until the project finished on August 10, Dr Fairweather would visit the house most days on her way home from work to check on progress.

She said: “It was something we’d been planning for some time and I decided we might as well go ahead as we weren’t going to be doing anything else over the summer. Everything tied together nicely in terms of keeping it secret.

“The work started during the regatta so I had the excuse that I didn’t want to go home because of other people parking in the street.

“After that we had the long, hot summer so it actually made more sense as John could see a lot more of the children. Before that he’d only really been able to spend time with them at weekends.

“The only disruption was the skip outside the house, which miraculously nobody mentioned to my parents. I was surprised they never drove past it themselves and was sure someone would find out before it finished.

“I was working full-time so Diogenes and Diego effectively led it. They did an incredible job because they knew the circumstances behind the project and were keen to help.

“They went well above and beyond the call of duty, working extra hours at the evenings and weekends to make sure it stayed on track.”

The day after the work finished, the family went to Cornwall for a week’s holiday.

When they returned, Dr Fairweather spent several weeks cleaning the house and replacing furniture before revealing it to her partner.

Mr Jackson said: “I had no idea and neither did her parents. Charlotte’s always on call so it’s not unusual for her to suddenly walk off to respond to something urgently.

“I’m usually quite an active bloke and used to be an outdoor instructor so there were obviously times when I felt a bit down. Having the children around over the summer snapped me out of that because they’re always doing something that makes you laugh and takes you out of yourself.

“I’m very proud of Charlotte and grateful for what she has done. Shust how much she’s capable of.”