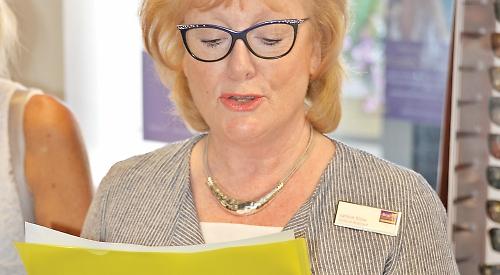 THE owner of a Henley optician’s practice has celebrated 35 years in the profession.

Neil Frost, 56, has worked at Frost Borneo in Hart Street since 1983 and has been a partner in the business since 1988.

He and fellow partner Catalina Borneo celebrated his milestone with a party for the 13 staff and about 90 patients on the premises on Thursday last week.

Mr Frost cut a cake made specially for the occasion which bore a message of congratulations and the guests were each given a slice along with a glass of champagne.

Janice Stow, who is an optical assistant, read a poem celebrating Mr Frost’s career. It was written by practice manager Clare Willis, who was unable to attend as she was on holiday.

The staff then presented Mr Frost with a framed copy of the poem which they had all signed.

Mr Frost, a father-of-two who lives in Gallowstree Common with his wife Helen, was given his first job at the practice in the summer of 1984 after completing a year’s supervised training under the then owner Dr Brian Gegg, who had run it under his own name since 1965. After four more years, he was invited to become a partner in the business.

Dr Gegg, of Newfield Road, Sonning Common, retired in 1997 and was replaced by Miss Borneo, from Charvil, who had also been hired as a trainee optician before being given a permanent role.

Mr Frost, who grew up in Staffordshire and sat his optical science degree at City University in London, said: “It has been very enjoyable working in the same practice for all this time as I’ve been able to build long-lasting relationships with all my patients. It’s lovely to see people go through different stages of their lives and to treat their children when they arrive.

“I doubt I will be working another 35 years but I’m certainly not retiring. I just want to find a good balance between spending time with my patients, working on the business itself and having some leisure time as well.

“We want to keep up the formula we’ve got at the moment but there are some services we can add here and there.

“I’m very proud that we’ve met the challenge of keeping an independent business thriving for so long. There’s a lot of competition from the multiples but we’ve focused on delivering a personal service and in some cases we’ve been agile enough to modernise quicker than the chains. It’s good to be so well-trusted in the community.

“I’m also very lucky to be working with Catalina as the moment she came on board was when we really started building the business. Her joining was a real highlight of my career.”

Mr Frost said the poem came as a complete surprise and was a “really lovely gesture”.

“It couldn’t have been more perfect and I’m very thankful to all my staff and, of course, the many customers who’ve supported us over the years,” he added.

Miss Borneo said: “I can’t believe Neil has been working here for 35 years.

“It’s a great achievement and I’ve always enjoyed working with him. He knows his customers really well and has a great sense of humour so everyone gets on really well with him.”

The guests included Audrey Fisher and Dorothy Walman, from Binfield Heath, who have been patients since Dr Gegg opened the business.

Mrs Walman said: “We value the personal attention. Neil is just a great optician full stop and always allows a good half-hour to chat and catch up personally in appointments.

“He’s interested in your life generally, not just looking at your eyes, and Audrey and I hope he will see us for the rest of our lives.”

Biz Collett, from Russells Water, a former Henley GP who has been a patient for almost 30 years, said: “He knows his patients well and everyone at the practice knows exactly what they’re doing.

“It used to be said that the standard of care was so high that it was like an extension of the opthalmology unit at Townlands Hospital.”