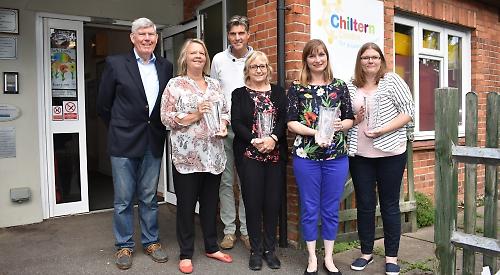 FOUR women who have spent a combined 46 years between them at the Chiltern Centre for disabled children in Henley have been honoured by the charity.

Jane Ainslie, Pamela Lee, Chris Kyle and Sarah Russ were recognised with long service awards at the centre off Greys Road on Monday.

Each received a crystal vase inscribed with their name and a message thanking them for their service.

Mrs Lee, Mrs Kyle and Miss Russ have each worked at the centre for 12 years while Mrs Ainslie has completed 10 years.

Mrs Ainslie, from Wokingham, who is the centre’s head of fund-raising, said: “It’s a real privilege to be part of this organisation, which started off small and has grown over the years.

“The most important thing is seeing the work that goes on at the centre — it’s the most motivating part of the job.” Mrs Kyle, from Abingdon, started off as a part-time care worker at the centre before working as an administrator. She said: “It has been fabulous and I really think this is a very special place.

“The people who work here bring a little bit of themselves to it and it’s the children and families who benefit.”

Her mother-in-law Marian Lee was once director of services at the centre and was interim manager in 2003 when Oxfordshire County Council stopped funding what was then known as the Chiltern Resource Centre.

This led to it re-opening as an independent, not-for-profit organisation a year later.

She said: “It’s nice to be recognised and I love working here. I like being involved with the kids and young people and seeing them grow and develop.”

Miss Russ, from Wallingford, is a residential support worker. She said: “I love it, it’s a very rewarding job and we see a lot of our youngsters grow into adulthood.

“When I first came I was a relief worker and I started working nights when I had my children. I can’t see myself going anywhere else.”

Centre manager Keith Manning said: “On behalf of your colleagues, families and, more importantly, the people who have benefited by the actions of your work to support them, I would like to congratulate you and thank you for your long service to the Chiltern Centre. Long may it continue.”

Paul Barrett, the centre’s chairman of trustees, added: “When you consider that when we started we weren’t sure we could even continue for a year or two, it’s extraordinary that we can find four of you that have managed 10 years.

“We thank you for your tremendous service.”