Chef killed by gritter after night of drinking 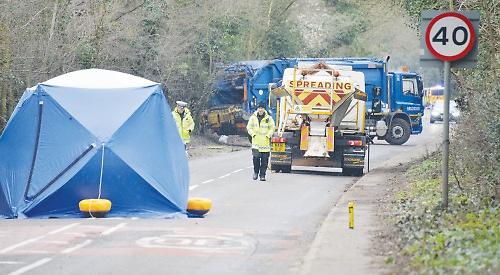 A CHEF who died after he was hit by a gritting lorry in Henley may have fallen into the road after a night of drinking, an inquest heard.

Daniel James, 30, was killed in the accident in Marlow Road in the early hours of March 17.

He had been drinking in the town with a work colleague and was seen partially-clothed on the verge near the entrance to Swiss Farm minutes before he was struck by the gritter.

Craig Thompson-Simpson, who was driving the lorry for Skanska, Oxfordshire County Council’s highways contractor, was not to blame for the collision, the inquest in Oxford on Wednesday was told.

He had seen the man in the road late as it was dark. He veered sharply but hit Mr James’ head with his bumper or passenger footstep before the rear wheels ran over his torso.

Two other vehicles, a white van and a Grundon waste collection lorry, swerved to miss Mr James and are not believed to have hit him.

Their drivers blocked the road as police were called and Mr James was pronounced dead at the scene.

Mr James, who was also known as “Kermit” or “Kerm” to friends, moved to Henley only two weeks before the incident when he started work at the Bull on Bell Street pub.

He had previously worked at pubs and restaurants in Bracknell, where he grew up with his mother Linda Wellsteed and siblings Chris, Ashley and Lorna.

The inquest heard he went drinking with his colleague Troy Damper-Elms after finishing his shift.

Toxicology reports found that he had a blood alcohol level of 240mg, three times the legal driving limit.

Pathologist Dr Brett Lockyer and forensic scientist Diana Garside both said this would have been enough to cause a “high degree of intoxication”.

There were also traces of cannabis in his blood, although the effects of alcohol would have been “dominant”.

Ms Wellsteed said she was aware of her son’s drug use, which was to deal with his autism spectrum disorder, although she didn’t condone it.

She said: “It was one of the big arguments we had. He wasn’t a one-time user, he had used it for a while to help him.”

Ms Wellsteed added that he was “vulnerable”. Mr Damper-Elms told the coroner that he had been working with Mr James and they decided to go out for “a few beers to get to know each other”.

They had several pints of beer and shots of rum and whiskey at the Catherine Wheel in Hart Street before going to the nearby Magoos bar, where they continued to drink.

The pair also visited a kebab shop in Greys Road where there was a “verbal altercation” with other customers, although no physical violence occurred.

Investigating officer Sgt Richard Grant said CCTV images showed Mr James had left Magoos shortly before 2am and walked around the town with Mr Damper-Elms before they parted ways in Bell Street.

The images showed him stumbling into the road on occasions, including once when he fell backwards on to his elbows in Thames Side. He was also filmed discarding his hooded top in Thames Side and his jeans in the doorway of a property in Bell Street.

Sgt Grant said there was clearly “evidence of impairment” and Mr James did not appear to be on his way home as he had walked past the turn-off to his house in New Street.

He said: “We don’t know why. There’s no evidence of third-party involvement. He either fell or intentionally laid in the road.”

Mr Thompson-Simpson, who has been employed by Skanska for 15 years, was gritting roads on the morning of the incident and the lorry used amber flashing lights.

In a statement, he said it was lightly snowing and the road was very dark with trees on either side creating a “tunnel” effect.

He saw a white van in front of him swerve and then saw on object in the road which he thought at first was a deer.

He swerved violently to the right, almost tipping the lorry over, but heard a bang and immediately pulled over.

When he left the vehicle Mr Thompson-Simpson said he saw Mr James lying on his back in the road.

Michael Edwards, a newspaper delivery man who was driving the white van with his son Joseph as a passenger, said he was on his way back from deliveries when the incident happened.

He had his full-beam headlights on when he saw something in the road, which he thought was a dead animal or debris.

As he got to within two car lengths he swerved round it and saw that it was a body.

Mr Edwards turned around in the entrance to a nearby property and saw the gritter lorry “jolt” before stopping.

He also flagged down the Grundon lorry driven by Daniel Miller and they then used their vehicles to block the road to other traffic.

The inquest heard that when these vehicles were inspected there was no evidence that either had hit Mr James, although the lorry had human tissue on its wheels which it may have picked up from the road surface.

Mr James suffered extensive injuries, including a blow to the forehead and one to his shin, which could have been caused while he was still upright or when he was run over by the gritter.

Other injuries included bruising on his torso from the lorry’s tyres and grazes on his legs, consistent with being run over.

His cause of death was given as multiple traumatic injuries.

The last person to see Mr James before the accident was Daniel Walsh, who had been driving back from an event in High Wycombe with friends when he spotted someone at the side of the road who wasn’t wearing trousers.

He said the man was hunched over rubbing his legs and looked “dazzled” and as if he didn’t know where he was.

At the time of the collision it was carrying a large amount of salt which would have affected its manoeuvrability.

He said the weather and road conditions did not contribute to the collision, although none of the three drivers was able to identify the object in the road as a body until they were very close.

Pc Hannan said Mr Thompson-Simpson did all he could to avoid hitting Mr James.

He said: “The driver did not have time to do anything other than what he did. Considering the vehicle he was driving, he did very well to do what he did. The collision appears to have been caused by the actions of the pedestrian.”

The coroner Darren Salter recorded a verdict of death by road traffic collision.

He said: “I’m satisfied that there’s nothing more Mr Thompson-Simpson could do. I’m struck by how quickly and violently he managed to swerve his vehicle to the right.

“Why it happened and why Daniel was in the situation he was in there are bound to be elements of uncertainty over.

“There is no evidence at all that this was a deliberate act, it appears to be accidental.

“It’s obvious he was well-supported and that he had some difficulties he struggled to cope with. It’s a very sad incident.”