Generosity is the theme of Mayor’s civic service 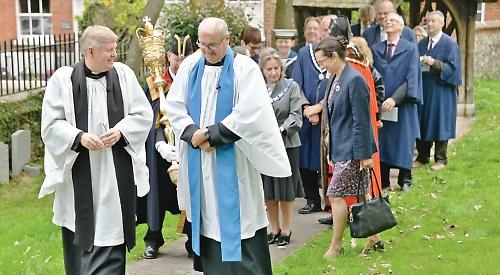 The event was attended by more than 100 people including Henley MP John Howell, Oxfordshire deputy lieutenant Lady Hall, who lives in Henley, and Lord and Lady Camoys of Stonor Park.

The councillors, who wore their ceremonial robes, assembled at the church’s lychgate in Church Street before being led inside by the rector Rev Duncan Carter, lay reader Michael Forsdike and town sergeant James Churchill-Coleman, who carried the ceremonial mace.

Worshippers sang the hymns Morning Has Broken, Jerusalem, Make Me A Channel of Your Peace and Guide Me O Thou Great Redeemer, which were chosen by Mayoress Anna Lambert, and finished with a rendition of the National Anthem. There were readings by the Mayor’s cadet Charlotte Searles and South Oxfordshire District Council chairwoman Lorraine Hillier, who is also a town councillor, before Councillor Lambert delivered his mayoral address.

Rev Carter gave a sermon on the theme of generosity, togetherness and service while singer Jenny Bell performed Simon and Garfunkel’s Bridge Over Troubled Water with a piano accompaniment by Annie Parker.

The service is usually held at St Mary’s Church in Hart Street but was moved because Rev Carter had agreed to lead it following the retirement of Rev Canon Martyn Griffiths, the rector of St Mary’s.

The Mayor said: “Everything went well and everybody seemed to really enjoy it. Jenny and Annie’s stunning performance was a highlight as both are good friends of ours and we were delighted when they agreed to perform.

“Rev Carter’s sermon about being generous with one’s time was very appropriate as that’s what Henley’s all about. Since becoming Mayor I’ve found out so much about the volunteers who do so much for the community.”