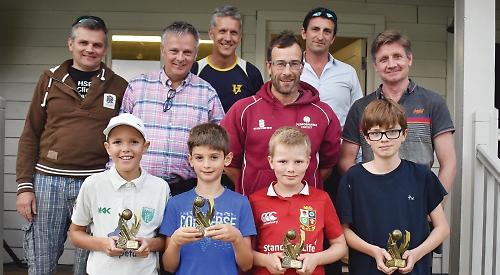 A total of 24 prizes was handed out to the top players at the club’s Brakspear Ground clubhouse.

There were bowling, batting and most improved player awards presented to players from the club’s U9 Panthers, U9 Lions, U11 Oxon, U11 Lynx, U11 Wildcats, U11 Cougars, U13 Berks Leopards and U13 Oxon teams.

Season highlights included an unbeaten run by the the U11 Wildcats to see them through to the semi-finals of the Berkshire League Cup.

The U11 Cougars were runners-up in the first division, missing out by just nine points.

They won all but two games, both against Wargrave but scoring 1,065 runs – more than any other team – and taking more wickets with 102.

The U11 Oxon team won division one by one point after playing some fine cricket. The team was made made up of players from the Cougars, Wildcats and Lynx squads.

The club has about 200 youngsters in its junior section playing the development squad up to its under 19 team.

Mike Quinn, chairman of the club’s junior section, said: “Although we want everyone to join in we still have that competitive element and it’s a great team game.

“I think we have got representation from every local school in our club.

“The senior team do rely on the juniors to fill in and we want to definitely encourage that as the boys get older and older.”

Mr Quinn paid tribute to U13 Leopards manager Andy Stephens who is stepping down.

He added: “I’d also like to say a special thank-you to all the parents who have helped out in one way or another over this past season. The team managers really appreciate your help in getting players to games, washing their whites, helping with scoring, umpiring, warm-ups and refreshments.

“We really cannot put on these games without your assistance. The more of us who help out from time to time the less work it is for everyone.”

The chairman’s award was this year presented to Damaris Hayward, who oversees the club’s girls’ section.

Mr Quinn said: “This individual is soly responsible for a large enthusiastic squad of players, has led Henley Cricket Club to many a final and is the most welcoming of coaches.

“This individual organises many very successful matches across many age groups. It is not unusual to see 30 to 40 cricketers training early in the morning enjoying their cricket and representing Henley to the highest standards.

“If it was not for this individual Henley would not have such a vibrant successful group of young ladies and girls.”