Saturday knights all right for jousting 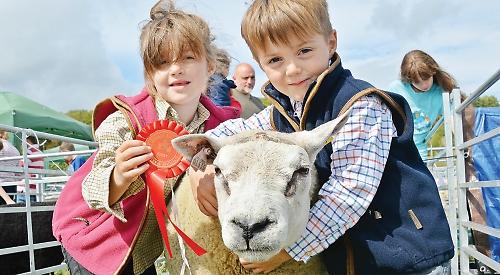 JOUSTING knights wearing full suits of armour were among the attractions at this year’s Henley Show.

Thousands of people attended the 127th annual event, which was held at the Greenlands Farm showground off Marlow Road on Saturday.

Despite an overcast start to the morning, the weather remained dry and by mid-afternoon the clouds had parted and the site was bathed in sunshine.

The main arena drew some of its biggest ever crowds when the Knights of Middle England, a stunt team based at Warwick Castle, performed twice.

The barriers were heaving with spectators as four members of the group charged in at speed on horseback. Each knight and their mount wore different coloured insignia and was sponsored by a business or individual.

They included “Sir Stephen of Southern Plant”, who carried a yellow shield with a logo celebrating the Henley plant and tool hire firm’s 30th anniversary, and a female rider sponsored by the Countess of Macclesfield.

The spectators were urged to pick a favourite and cheer as the knights performed stunts with a variety of weapons to the sound of music including Lead In My Pencil by Paolo Nutini and Low Rider by War.

The knights first carried out a training exercise called “quintains” in which they struck the shield of a spinning target with a lance while dodging the ball-and-chain attached to it.

They then picked up crown-shaped hoops on their lances, some of which had been set on fire, burst “pig’s bladders” which exploded into fireballs when popped, collected “severed heads” on javelins and raced to be first to slice a melon in half with a sword.

Finally, spectators were invited to lend items of clothing to their chosen combatant as “favours”, which was customary in medieval times, before they took turns to charge at each other in a bid to knock their opponent out of their saddle.

Meanwhile, trophies were awarded for produce and livestock in a range of classes including cattle, sheep, poultry, fruit and vegetables and flower arranging.

She had to lead it round the show ring while keeping its posture upright then ensure it remained in place when asked by the judges.

“We had James on standby in case he ran off but she did really well and definitely wants to carry on showing. I’m so proud because it was a big task — you only have to look at the size difference to see that.”

Meanwhile, Iggy was named reserve commercial champion. Mr Hicks, whose parents Dave and Sam own Kingwood Farm, said: “We’ve been coming to the show for as long as I can remember and have done better than we expected this year so I’m really pleased.

“I’m so proud of Ellie because she’s done better than she’d hoped. As long as she’s happy then we’re all happy.”

In the produce tent, show regular Tim Saint recorded another series of wins with his oversized vegetables.

Mr Saint, 37, from Playhatch, said his entries were slightly smaller than in previous years due to the difficulty of growing during the exceptionally hot summer.

He spent up to four hours a day watering his crops by hand and had to cover them with a thick tarpaulin between waterings to stop them from drying out.

Mr Saint said: “The cold snap in March wasn’t a problem but the dry spell was a real challenge. I was lucky to have stored up two big rainwater butts before it kicked in.

“It has probably been my hardest year in about a decade but considering those difficulties I’m pretty proud of the results. It was tough going but worth the effort.

“I imagine many people had similar problems but the standard of entries was still very high.”

The scarecrow competition was won by Tegan Silva-Tully, 11, from Nettlebed, whose entry was designed to look like the show’s chairman Andrew Ingram.

Its head, arms and legs were made of stacked flowerpots and it was decorated with flowers and scraps of old clothing bought from charity shops. The figure also wore sunglasses and had a wooden knob from a cabinet door for a nose and a moustache made from cotton wool.

Donna Guile, the produce tent manager, who lives next door to Tegan and helped her make it, said: “It’s very much her victory — she is a very creative girl and came up with lots of clever ideas.

“She wasn’t able to come today but I’m looking forward to telling her the good news and I’m sure she will be very excited.”

Victoria Wooldridge, who is a vegetable grower at Huttons Farm in Hambleden, was named best in show in the floral art section for her arrangement of lilies, white roses and white zinnias in a clear vase lined with lime slices. She also won the prize for best quality beetroot and came second with her truss of tomatoes and for a photograph of frozen droplets on a cobweb.

She said: “I’m overwhelmed and very happy with these results. I’ve been showing here for three years and won in classes before but never got best in show. It has just been an amazing day and I can’t stop smiling.

“I love the diversity of the exhibits and the friendliness of the competition. You’re up against each other but you get to know everyone else and just have a bit of banter.”

Entrants had to create a scene themed around one of the 12 days of Christmas from the song and the women chose “seven swans a-swimming”.

Their display included a backdrop in which cardboard swans with cotton wool feathers were swimming in a river made from blue crepe paper. It also featured a decorated Christmas tree and wreath, swan-themed cupcakes and an origami swan made by Mrs Hermon.

Mrs Hedges, who co-ordinated the women’s entry and also won in several floral classes along with her husband Keith, said: “We’re proud and excited to have won and hope it will inspire other WIs to give it a go.

“We entered the Capel Young section for the first time last year and came second, which was very pleasing, and we’re so happy to have done even better on the second attempt.”

Other attractions included showjumping, heavy horses, a fun dog show and ferret racing organised by the Hants and Berks Ferret Club. There was also food and drink, crafts and shopping marquees with stalls run by local suppliers as well as a food and farming marquee with interactive workshops showcasing various farming skills.

This featured a wooden cow named Delilah which children could “milk”, a table where families could mill grains and enclosures containing lambs, rare breed ducks, Tamworth piglets and a cow which a farmer milked.

Members of the South Chiltern Beekeeping Association exhibited a hive containing about 15,000 bees, including a queen who was marked with a yellow dot on her abdomen.

Virginia Deradour, who ran the marquee, said: “It has been pretty popular with the children, especially the piglets. It’s a great way to educate people about where their food comes from and I think there’s a growing interest in that.

“The show does a great job of explaining farming to the public and I think our visitors really enjoy that traditional aspect.” Another popular attraction was the giant Aldabra tortoises, which are tame and can be stroked.

The Henley Young Farmers had a stall featuring fairground games and raised funds by filling a tractor cab with balloons and challenging visitors to guess how many were inside.

At the end of the show, the person who made the closest guess won a scale model of the vehicle.

Jes Gascoyne, who helped to run the stall, said: “We’ve had a lot of interest, especially from some of the younger visitors. This is always a good event for meeting new junior members and we’re hoping a few more people will sign up.”

The show also included displays of classic and vintage cars, motorcycles, horse-drawn carts and agricultural vehicles, many of which took part in a grand parade in the main arena.

There were demonstrations of hunting with horses and hounds and wool spinning as well as a children’s fun fair with bungee trampolines and a helter-skelter, roundabout, giant slide, inflatable obstacle course and Punch and Judy show.

Graham Watkins, from Oxford, staged gun dog displays in which he showcased the skills of different breeds, which he led using a chicken feather on a length of string and trained to freeze “on point” for several minutes at a time.

Sheep farmer Warren Calitz, who is originally from South Africa, talked about the wool industry and the temperaments of different breeds before giving a shearing demonstration.

He produced a ram from a box which he calmed and restrained by forcing it to sit on its bottom before removing its coat with a set of clippers.

Before releasing it, he told the crowd: “He’s going to come flying out and although I usually catch him, under health and safety regulations I must warn you that if he comes flying off the stage without me attached, that isn’t part of the act.

“You should back slowly away if he approaches you and if you can feel his breath on your neck, then run as fast as you can. Now that I’ve told you that, you can’t sue me — oh, and best of luck to the kids in the front row!”

The event closed with a series of parades, including one featuring animals from the livestock sections before the Corunna Band and Bugles, of the Rifles Battalion of the Oxfordshire Army Cadets, conducted the closing ceremony.

Show president Simon Stracey, of White Pond Farm in Stonor, said: “It has been a brilliant day. The weather has been great and there have been so many incredible things in the main ring, especially the jousting.

“It’s the busiest I’ve seen it for a long time and everyone I’ve spoken to has said they thoroughly enjoyed it. I reckon we should have had a bookmaker because I gather people were taking bets on who would win!

“The whole show has been absolutely stunning but that’s down to all our volunteers and staff who between them have done such a great job. It has been a great honour to be president and I would recommend it to anyone.

“When Andrew Ingram asked me to be president, I asked if the role involved just posing around or whether I would get my hands dirty. He said I could do what I liked and as a farmer I like to roll up my sleeves and muck in. You get much more out of it that way.”

Ms Taylor said she believed the attendance was up on last year.

She said: “We’re very happy with how the show went this year. I’ve had lots of emails thanking us for our efforts and people say it was great across the board.

“The knights were fantatsic and everybody loved them. The tortoises were very popular with children and we have already booked them for next year.

“Considering the hot summer, I think the produce tent had never looked better. It’s a real credit to Donna, who marked her 20th anniversary this year, and we’d all like to thank her for her contribution over many years.”