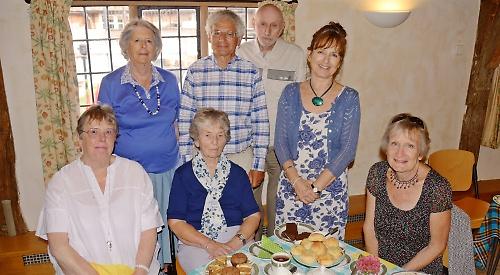 VOLUNTEERS from the Oxfam books and music shop in Henley enjoyed a tea party to celebrate its 20th anniversary.

About 25 people attended the event, which was held at the Chantry House behind St Mary’s Church on Friday.

They were served sandwiches and cakes, most of which were made by Sabine Adams, who has been part-time manager of the shop since it moved to Duke Street eight years ago.

Mrs Adams, from Christmas Common, joined the charity as a volunteer in 2008, when the shop was next door to the Oxfam shop in Market Place. She now oversees a team of about 50 volunteers who sort and value donations as well as working on the shop floor. Since the shop opened in 1998, it has raised more than £2.2 million.

Mrs Adams said: “It’s an incredible achievement, especially as the shop didn’t have a manager when it started and was run solely by volunteers, many of whom are still with us today.

“I’ve enjoyed working there very much because there’s always a buzz and every day is so different and exciting. You get to chat with so many lovely people, both on the team and the customers. A few of the volunteers contributed to the food today but I made the most of it because they work so hard and I really wanted to treat them. They’re a wonderful group of people.”

Guests included Val Knight, 81, from Shiplake, who began volunteering at the regular Oxfam shop in 1996 and joined the books and music outlet when it opened.

She said: “I still really enjoy it and do about 10 hours a week over three shifts, which is less than I used to do but I’m much less agile now. I have limited mobility so coming out to do this is good exercise.

“I find the work really interesting and, of course, the people are lovely. It’s a great way to keep your mind busy and I love talking with the customers.” Also present was David Patrick, 82, who recently moved to Henley from Woodcote and volunteered at the shop with his wife Jill from the day it opened until they retired in January 2016.

The couple moved to Oxford and volunteered in shops there but Mr Patrick decided to return after his wife died last year. He specialises in identifying and pricing vinyl records.

He said: “Jill and I always enjoyed the company and the mental effort of pricing helps to keep you young mentally.

“It gives you a reason to get up and get on with your day and you know that you’re doing something worthwhile.”