Auctioned hippos to go around the world 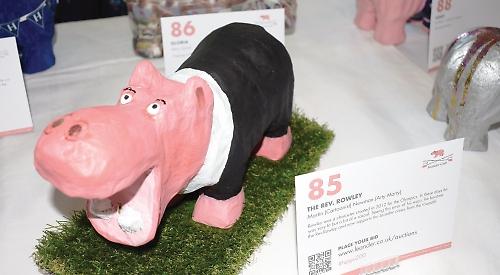 LEANDER Club in Henley has raised at least £8,000 for charity by auctioning off 180 papier-mâché hippos.

The 1ft long figures were among 200 that were decorated by  schools, businesses and community groups to help celebrate the rowing club’s bicentenary.

They were exhibited at the town’s River & Rowing Museum in May, then put on public display at various locations over the summer before being reunited at the club after the royal regatta.

Some were painted in colourful patterns while others were decorated with items of clothing, wigs and even miniature props like aeroplanes and rowing boats.

More than 300 people bid for the models in an online auction which ended on Sunday. The club’s website crashed briefly due to a last-minute rush of bids.

The hippos are now being packaged for sending to successful bidders as far away as Italy, America, New Zealand and Australia. Some are Leander members.

Darren West, who owns Henley Self Storage, successfully bid for 50 hippos and plans to display them at his premises on the Newtown Road industrial estate.

The proceeds will go to the Kafue River and Rowing Centre on the Zambezi river in Zambia, which researches ways of providing clean water and conserving aquatic wildlife.

Earlier this year, four Leander members took part in a 830km row on the Zambezi in aid of the project.

The hippos were the idea of Caroline Mulcahy, Leander’s house manager, and Shelley Robertson, of Wilson Avenue, Henley.

Mrs Mulcahy said: “We’re still taking the money but so far everyone has been very good at paying.

“Some of the schools and children’s group wanted their hippos back but we had a flurry of bids for the remaining ones and we’re very sorry if anyone wasn’t able to get through.

“It was very popular due to word of mouth, social media or simply people seeing the hippos during the regatta. The artists all enjoyed taking part and it was wonderful to see the sheer variety of entries. It clearly unleashed a lot of people’s talent, creativity and imagination.

“It will be strange not to have them here after all this time but people have promised to send photographs so their story will continue.”