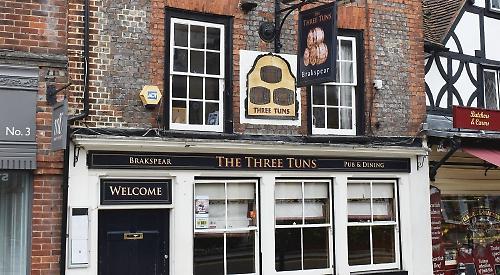 A PUB in Henley town centre has a new landlord.

James Halsall, 33, has taken over the Three Tuns in Market Place from Mark and Sandra Duggan, who ran the Brakspear pub for seven years.

He has been in the hospitality industry for about 10 years and has worked at a number of local pubs.

Mr Halsall said: “This is a fantastic pub that has been great in the past and I’m trying to breathe life back into it with the support of Brakspear.

“I’ve always been passionate about pubs. I’ve worked in many of the pubs in Henley, including the Anchor, the Golden Ball and the Little Angel.” Mr Halsall, who grew up in Remenham and went to Shiplake College and The Henley College, says he always intended to run his own business.

He attended Oxford Brookes University, where he studied hospitality and business management.

After graduating, he worked as a chartered trainee accountant in Thame for three years.

He then spent three months as general manager of Loch Fyne in Henley before returning to Oxford Brookes to complete a master’s degree in international hotel and tourism management.

After graduating again, he worked for Peach Pubs in Bicester for a year, running several of its sites, and then ran a 150-bed hotel and restaurant in Torquay, helping to turn the business around.

He then spent three years as a regional manager for global restaurant group Yum!, looking after its KFC brand in London with responsibility for 65 outlets.

After this he spent a year as operations and people director for Tossed, a salad fast food chain, and was then operations director for the UK and Ireland at food and catering firm Compass Group.

Mr Halsall lives in Wandsworth but since he took over the pub last month he has been staying with his parents John and Marilyn at the family home in Remenham.

His father, who is a member of Remenham and Wargrave parish councils and Wokingham Borough Council, has been helping his son behind the bar.

Mr Halsall said: “It’s exciting — we have got a great team and the support from the locals has been incredible.”