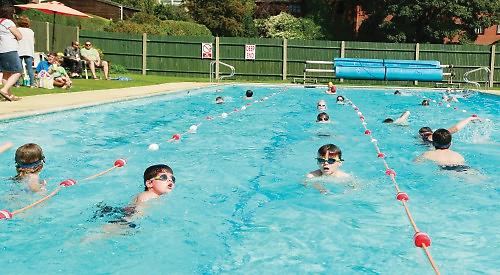 PLANS for a £500,000 lido in Henley have been backed by town councillors, writes Phil Simms.

Michaela Clarke, of Elizabeth Road, said the outdoor pool would be a leisure attraction and meet the demand for children’s swimming lessons.

It would be 25m long with an additional 10m by 10m shallow area for children. It would have toilets, showers and changing rooms.

A meeting of the town council’s recreation and amenities committee heard that the pool would generate income of £16,800 a week based on a fee of £6 for a two-hour session with four sessions a day, seven days a week.

The plans were supported by people in the public gallery, including members of the Henley open water swimming club.

Eva Rickett, of King’s Road, said: “There are regularly 40 to 50 of us who swim all year round in the river and we are mad!”

Laura Reineke, of Elizabeth Road, said: “I would really like to support this proposal. I do think it is important that it is long enough and big enough for people to do exercises and everything that goes with kids’ outdoor swimming.”

Lucie Thaxter, of Harpsden Road, said the facility would be important for the town given its sporting heritage.

She added: “I think there are enough people with an interest to take it forward and do a good job of it. I also think it is critical that it is an all-year-round facility.”

Mike Trethewey, of Queen Street, said: “It seems like a commercial operation that’s good for the town.”

Mrs Clarke told the councillors: “I think it would put Henley on the map a little bit. We are always comparing ourselves to Marlow and Marlow doesn’t have an outdoor pool.

“You have a lot of money in the bank and residents would like you to spend a little bit of it.”

Councillor Sarah Miller said she had learnt to swim in the river so she supported the idea.

Councillor David Nimmo Smith said he supported the idea and suggested having the pool in Marsh Meadows, adding that it could be a “legacy”.

But he said the pools in Abingdon and Wallingford were closed during the winter season and warned: “It would cost a lot of money to have them working 365 days a year.”

Councillor Kellie Hinton, who chaired the meeting, suggested that a community group was formed to take the project forward.

Councillor Sam Evans suggested a group of volunteers, adding: “It shouldn’t be a council-run project.”

The committee agreed to set up a working group comprising Mrs Clarke and Councillors Laurence Plant and Glen Lambert, the Mayor.