Brakspear wins award for support of Pub to Club Swim 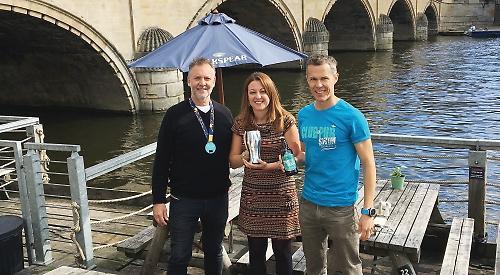 BRAKSPEAR has won an award for its partnership with the Henley Club to Pub swim.

This was for its role in developing and supporting the event, which took place for the fifth year running in July and attracted more than 600 swimmers. It is part of the Henley Swim series, four events which take place in the River Thames in Henley over the summer.

The Club to Pub entrants have to swim 1.5km from Henley Rowing Club to the Angel on the Bridge pub, which is owned by Brakspear.

Each finisher receives a bottle of Brakspear’s Two Bells beer, which is brewed specially for the event and named because the swimmers have to complete the challenge between the 7pm and 8pm chimes of the bells of St Mary’s Church.

“Everyone loves the social aspect with the beer at the finish line and the after-swim party at the Angel on the Bridge.” Jeremy Laming, founder of Henley Swim, said: “From the outset, Brakspear has been a fantastic partner, instilling a sense of fun into the event. Swimmers look forward to their bottle of Two Bells and the medal incorporating a bottle opener as they come out of the water.”

The award was collected by Brakspear’s business development manager Gavin Mansfield, who took part in this year’s event, at the Truman Brewery in London.

Judge Pete Brown said: “In the best sponsorships, the sponsor gives something back in return for gaining awareness. The judges liked the generosity of the Brakspear idea, which includes giving each swimmer a bottle of beer as they get out of the water – what could be a better end to a swim?”