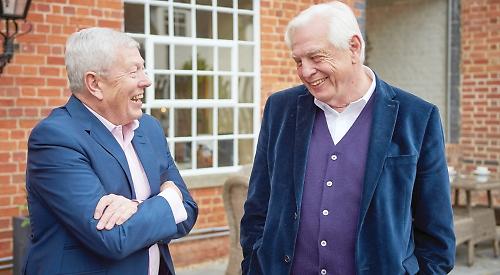 JANE HAWKING criticised the Oscar-nominated film adaptation of her memoir at the 12th annual Henley Literary Festival, saying it distorted facts about her life with her late ex-husband Stephen Hawking.

Her book Travelling to Infinity was adapted into 2015’s The Theory of Everything starring Felicity Jones and Eddie Redmayne.

Speaking at the Kenton Theatre in New Street on Monday, Mrs Hawking criticised the film, saying inaccuracies were being immortalised as fact.

Scores of well-known authors, writers, journalists, broadcasters and celebrities are speaking at the festival, which has been expanded to nine days for the first time.

Organisers say they have sold more than 21,000 tickets so far to the 170 talks, Q&As, workshops and performances, and are hoping for another record-breaking year.

Mrs Hawking was married to the physicist, who died in March, for 30 years before they divorced in 1995. When she raised concerns with him about how her story had been depicted, he was not worried.

She said: “We talked about the film at the time. He was less concerned about it than I was. I knew if there was a mistake in the film it was going to be immortalised, which they have been.

“As I’ve said, I found that irritating — I did not want it to happen. The upshot is don’t believe everything you see in films.

“He did confess he was pleased with it and he confessed it was a great privilege to have a film made about him in his own lifetime.”

Mrs Hawking said she and Prof Hawking discussed the film after watching it. She said: “Stephen felt like the film should have been more about science and less about emotions, but my feeling was the opposite. The film was very true to life.

“On later reflection, there were aspects I was not so pleased with.

“Facts were distorted in the interest of limiting the running time to two hours. I was not an undergraduate when Stephen and I met — we met when in our home town of St Albans when I had just left school and Stephen was starting his PhD studies in Cambridge.”

Mrs Hawking also spoke about the time the couple and their young family would spend travelling around America attending conferences.

She said the film did not cover the travelling and transporting the family around the country to attend the events.

“I asked for a fast-forward version, simply getting the suitcases, wheelchair and passengers into the car, but was told it was not possible because of time constraints,” said Mrs Hawking.

Mrs Hawking said she gave a copy of the book, first published in 2007, to Mr Hawking but does not know if he ever read it.

She said: “He really only read scientific papers — anything with narrative did not interest him.”

Mrs Hawking said her ex-husband’s death was like the “felling of a giant”.

His ashes were interred at Westminster Abbey in June this year. She laid flowers with two of their three children, Tim and Lucy.

Mrs Hawking said: “The situation was so extraordinary because Stephen was given two years to live in 1963 and he fought the wretched disease until this year.

“It was as if a giant had been felled and taken from us. We thought he was immortal and I think that goes for all of us.”

She added: “After his death he was allowed the honour of a burial in Westminster Abbey after a magnificent memorial service attended by some 2,000 people. This end to his life was something neither he or I had ever dreamed of.”

Mrs Hawking said she and her husband Jonathan Jones were asked to appear as extras in the film as an “academic couple” in a scene depicting a May ball celebrating the end of the academic year at the University of Cambridge.

They were dressed in full Sixties attire for the day of shooting but in the end their scenes did not make it into the final film.

“We thought we may appear in the finished product but it was a great disappointment,” she said.

Mrs Hawking, who also appeared at the festival in 2015, was promoting her second novel Cry to Dream Again and read an extract to the audience.

Trainspotting author Irvine Welsh spoke about his latest book Dead Men’s Trousers on Saturday, the opening day of the festival.

It has been published 25 years after Trainspotting and reunites Renton, Begbie, Spud and Sick Boy.

Welsh read an excerpt from the book to the crowd in the festival hub in Market Place and told them it may be the final outing for his characters.

He joked: “It really depends on how the finances are in a couple of years’ time.”

He said the characters’ drug use and “messing people around” in Trainspotting seemed quite “deviant” at the time but added: “Now it seems like normal family life”.

Welsh said he believed people were “worse behaved” now than they used to be and society had become “individualistic and narcissistic”.

The 60-year-old author, who lives in Miami, confessed that at one time he thought he would die young.

He said: “I was one of those people who thought I was going to die before 30 — I did my best to make that happen.

“All the guys in my family were dead in their twenties or early thirties. They were like flies — they lived long enough to breed and then died.

“They were all related to misadventure, people falling in front of trains and all that kind of stuff. It made me kind of think ‘maybe I’m not meant to die at 30’.

“Every year after 30 feels like a bonus. I felt like I’d got a telegram from the Queen at 30!”

Journalist John Simpson spoke about his 52-year career with the BBC and his book Moscow, Midnight at the Kenton on Sunday.

He was in conversation with Sue Cook and confessed that he once defied his foreign editor and boarded the Ayatollah Khomeini’s flight from France to Tehran in his bid to overthrow the Shah of Iran in 1979.

He had heard the Shah’s air force was going to shoot the plane down but said: “I thought ‘if I get there I’ll have such a good story they won’t be able to do anything to me’ and if we get shot down the ultimate sanctions of the BBC might not be so effective!”

Simpson also briefly spoke about the BBC gender pay gap after the corporation was found to be paying women “distinctly” less than men. He said: “After that, it turned out that at ITV, for instance, the gap was double there. There shouldn’t have been any gap there at all.”

He also spoke about possible Russian involvement in the death of his friend and former journalist Stephen Milligan, who had worked in Moscow.

The MP was found dead at his home in 1994 wearing women’s underwear with a ligature around his neck.

Simpson said he later spoke to a friend of Milligan’s who said it was obvious he had been murdered by the KGB.

“He said ‘What better way to kill somebody without their being any kind of investigation than this?’ Many people thought it was funny or savage or too embarrassed to have anything to do with it. At least two people — critics of the Yeltsin government — had died in the same way in Russia.”

Simpson said he was “very impressed” when he interviewed Russian president Vladimir Putin.

“He was really polite and he said to me that he watched the BBC a great deal to improve his English — which is not bad actually. I thought, ‘this is not the man I expected’ but he still leads a lawless county.

“He’s a highly intelligent man. The last time I saw him was when he gave a government press conference. It was an absolutely bravura performance. It lasted three and a half hours and he didn’t have a single note in front of him.”

Novelist Louis de Bernières confessed to bunking off school as a boy so he could earn money working on a farm.

He told an audience at the Kenton on Monday that he would frequently skip classes when a student at Bradfield College in West Berkshire.

Mr De Bernières, author of Captain Corelli’s Mandolin, said: “I would sign in for weightlifting but actually went to work on a farm. I was there making sure the bull got mated and digging up potatoes.”

He said he generally avoided returning to Cephalonia, the setting of his best-selling novel.

“I used to go back and every time I did they would put on a banquet and make long speeches,” he said. “You can go on a Captain Corelli tour. I am fairly sure it’s completely fabricated and if I went on it I could find out where I should have gone!” Other festival speakers this week have included wine critic Oz Clarke, War Horse author Michael Morpurgo, Birdsong author Sebastian Faulks, poet, comedian, songwriter and presenter Pam Ayres, and former England fly-half Rob Andrew.

The Beatles’ hairdresser Leslie Cavendish, who revealed that the young John Lennon was so worried about going bald he once asked him for an emergency consultation.

Henley broadcaster and author Mike Read, who is chairman of the British Plaque Trust, claimed there were too many blue plaques dotting the country.

Speaking about his new book, The Writing on the Wall: 100 Iconic Blue Plaques, the former Radio 1 DJ said that some memorials had only a tenuous link to the person they honoured.

Former home secretary Alan Johnson returned to the festival to speak about his book In My Life, a look back at his life and love of music. Today (Friday) TV and radio presenter Fearne Cotton will speak while former England football manager Kevin Keegan will make his festival debut at Phyllis Court Club.

Fstival programming director Tom Ryan said: “Last year we sold 22,000 tickets and we’re hoping over the next few days to surpass that — it’s feeling like a record-breaking year.

“There has been a really nice range of events from school events, authors and sports stars. We’ve had some lovely feedback from the authors and it’s very busy down at the festival hub in Market Place.

“It’s pretty much the same number of events as in previous years but when we were across seven days we had occasions where we had five events on at one time. Now it’s two of three.”