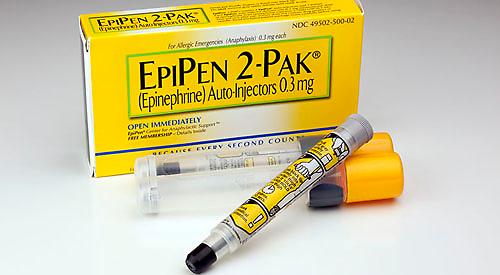 A PHARMACY in Henley says it is coping despite the national shortage of EpiPens.

There have been supply problems with the adrenaline injection, which is used to treat severe and life threatening allergic reactions, since the spring.

Mylan, the company behind EpiPen, is pressing its manufacturing partner Pfizer to do more to tackle shortages.

The company’s product is the biggest of the adrenaline auto-injectors on the market and shortages have had a knock-on effect with the stocks of other injectors such as Jext and Emerade.

Vik Patel, pharmacist and pharmacy manager at the Henley Pharmacy in Bell Street, Henley, said his only concern was the shortage of junior EpiPens.

These provide a smaller dose and are needed for small children.

He said: “The children’s version has reached a point where it’s not available.

“We are happy to give the adult version to older or larger children, it’s completely safe. The main problem you have is with the really small children.”

Mr Patel said the pharmacy was experiencing similar problems to others across the country.

To get hold of stock they have to fax anonomysed prescriptions to suppliers to show they have a bona fide patient who needs it.

Mr Patel said: “When a doctor sends a prescription, we cover the patient details then fax it to the supplier and manufacturer to prove we have a need for it. It means the people who need it get it.”

He said patients were being advised to keep the devices even if they go out of date.

He said: “Doctors are advising people to keep hold of them even if they are slightly out of date. Just until we can find a replacement because it is going to be better than nothing.”