Stroke club could fold without younger volunteers to help 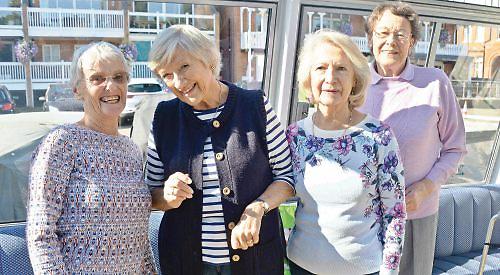 THE founder of Henley Stroke Club has warned it could fold within six months if nobody steps forward to take it over.

Audrey Richardson, who launched the club in January 1981 and was chairwoman for more than 20 years, says she and her successors are now struggling to meet the demands of running it due to their age and health problems.

The club, which has about 20 members who have suffered a stroke, meets every Tuesday at the Christ Church Centre in Reading Road, Henley, for coffee, socialising and entertainment including quizzes and lectures.

It also organises a monthly outing to nearby places of interest and an annual boat trip on the Thames.

Mrs Richardson, of Wootton Road, Henley, was inspired to start the group after reading A Stroke In The Family, an account of actress Patricia Neal’s lengthy rehabilitation following a stroke at the age of 39 in the Sixties.

In 1980, when she was working as a physiotherapist at Townlands Hospital, she volunteered as a driver for the newly launched Community Help Service, now known as the Henley Volunteer Bureau.

She realised a stroke club would help many of its users so she placed an advertisement in the Henley Standard and the club’s first meeting attracted eight members and 12 helpers.

Now Mrs Richardson, who still helps to run it, says it is in jeopardy because its chairwoman Veronica Townsend is unwell while she is her eighties and would struggle to dedicate enough time to the role.

She says it should be easy for someone younger to organise and this would provide a lifeline to stroke sufferers and their families.

Mrs Richardson said: “We’ve been going for a long time and, believe it or not, many of our helpers have been with us since the beginning so we’re getting rather too old for all this.

“We need someone to take over as we can just about hobble along for a little bit longer and would hate to see it fold but we can’t continue beyond another six months or so.

“It’s an incredibly happy club and if you’ve got a head for organising things then it shouldn’t be too onerous. We just need someone who will take it seriously and can commit to it permanently.

“It’s the most rewarding thing you can possibly do. I remember a woman once rang me in a desperate state because her husband had come home from hospital following a stroke and had just turned away to stare at the wall.

“I came round with a photo album showing what we do and he agreed to come once but insisted he wouldn’t be going a second time.

“However, he never looked back after that first visit and it became the one day a week that he always got out of bed early for. We won a competition in the Nineties where our members were asked for feedback and I remember one said it was a place where they felt no different from anyone else and able to laugh with others and at themselves.

“Some people who’ve had strokes have difficulty speaking but at the club they don’t feel ashamed because everybody understands and they can even gently joke about it.

“We had one member who had lost the ability to speak but at a Christmas party his son said he wanted to announce something.

“We all went silent and he just said, ‘I want to thank all you people’. We were all in tears because he was so determined to say it.

“I’m totally passionate about the club and it has never felt like work to me as I have loved every minute.

“When I told the group how bad the situation has become during the boat trip they were absolutely horrified.”