Perfect day for ploughing whether by modern tractor or old horse 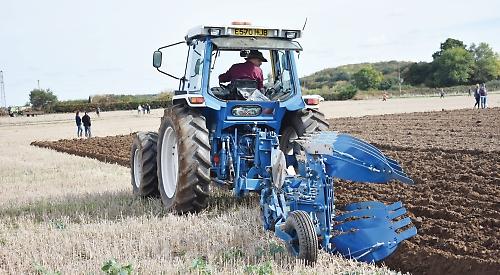 Hundreds of people attended the event, which is organised by the Henley and District Agricultural Association, at Bishopsland Farm in Dunsden.

The day began with the traditional blessing of the plough by Rev Stephen Cousins, the association’s chaplain.

The competitors then set to work on their designated plots using both traditional and modern tractors as well as horse-drawn ploughs.

They were judged on criteria such as straightness of their furrows, uniformity and “burying the track”, which means ploughing over marks left by the wheels of their tractor.

Rain the previous day meant the ground was soft and easier to plough for the competitors, who included farmers from across the Thames Valley.

Ray Handy, from Hurst, was taking part on his 1959 Fordson Dexta, the same model he learnt to drive as a teenager.

He said: “My father had one and when I was a few years older I bought one. I do a bit of ploughing and take my grandchildren out in it.”

Other attractions included a heavy horse village featuring displays by working horses and demonstrations of logging and dray-pulling, a dog show and ferret and terrier racing.

There was also a working machinery display and a poultry auction. New for this year was a display of steam ploughs.

Jennie Spooner, who is the association’s agricultural
chairwoman, said: “It was a very successful day. We had a steady number of people through the gate and the steam plough proved very popular.

“The little bit of rain on Saturday will have done some good and the weather for the actual event was spot on.”

The Ron Vines Cup for the best work done by a ploughman or woman aged 17 to 20: Aiden Greenaway.

The Drewitt Memorial Cup for the best opening: Graham Clifton.

The Mick Hunt Cup for the best finish: Roger Hannington.

The Christopher George Cup for the best work by a Massey Ferguson tractor: Melvin Stamp.

The Ewelme Perpetual Cup for the champion ploughman in the association area: Mike Yeats.