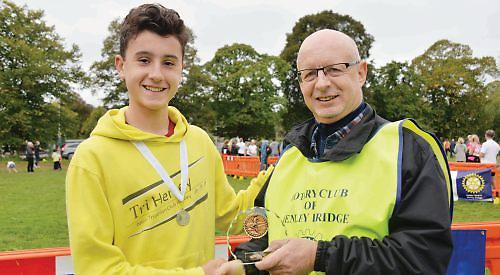 RUNNERS of all ages will take part in the 36th Henley half marathon and Henley Standard 10km on Sunday.

More than 1,500 people are expected to join the races, which will both start and finish at Borlase Field, next to Henley Rugby Club.

The main race, which is sponsored by Invesco, follows a route over Henley Bridge, along Remenham Lane to the Flower Pot pub at Aston, back along the towpath and over the bridge.

The event is organised by the Rotary Club of Henley Bridge and raises money for various charities. Entrants can also raise money for their own causes.

Kirstie Donald, a teacher at the Oratory Prep School in Goring Heath, will be running the half marathon with her son Archie, 15, a pupil at Radley College.

The pair, who live in Howe Road, Watlington, will be supported on the day by Mrs Donald’s husband Ed and their other children, Monty, 13, Hugo, 11, and Annabel, seven.

Mrs Donald, who will also take part in the London Marathon in April, is raising money for a nursing home in Surrey which cares for her father, who has advanced Alzheimer’s disease.

She said: “The half marathon is really to help with the training process and Archie said he wanted to do it with me.

“He rows and plays rugby for Radley so he does a lot of training and his fitness is quite high.

“It’s his first official half marathon but he has done quite a few training runs that have been that distance or longer.

“I’m hugely proud of him and delighted to have his company on the run. It’s really special to do it as a family.

“I think we’re going to start off together but I’m sure he’s going to beat me.”

Elaine Waugh, 45, of Harpsden Road, Henley, will be running the 10km with her daughters Matilda Manly, nine, who attends Shiplake Primary School, and Janey Mai Manly, 12, a pupil at Kendrick School in Reading.

It will the third year the family has taken part.

Mrs Waugh said: “The girls really enjoy the occasion and it’s a wonderful atmosphere down there all day long.

“It’s just a really good experience and a beautiful run through the countryside. There’s no pressure to go out and perform and do these amazing times, it’s the taking part that counts.

“I can’t keep up with the girls but I’ll eventually catch up! I’m very proud of them.”

Martha Dickson, nine, who attends Sacred Heart Primary School in Henley, will be running the 10km, as she did last year.

She said: “I really enjoy running. I run in the school cross- country races and often do the Henley parkrun too.  This is the second time I have run the 10km and I really want to beat last year’s time.”

Adam Hunt, 15, from Tokers Green, will be running the half marathon for the first time after winning the 10km race last year.

The Shiplake College pupil has been a member of the Tri Henley junior triathlon club since it started four years ago.

His mother Joanne Humphrey said: “He has done a few 10km races, including Henley for the last three years. He has also done Pangbourne and did the Frieth Hilly a couple of weekends ago.

“He feels like he has peaked and now wants to challenge himself with a further distance. I think he’s excited and a bit nervous as well.

“My husband Alex is going to run the 10km and hopefully he’ll finish that in time to see Adam finish the half marathon. I couldn’t be prouder.”

Paul Harrison, president of the Rotary club, said: “It’s a great thing for Henley — it’s very communal and encourages people to be active.

“People like the ambience of the area and the gorgeous views along the River Thames. The serious runners also like climbing Icehouse Lane.”

Runners will be chip-timed and all finishers will receive a medal and a goody bag.

The Go Kids one-mile children’s race, which has been part of the event for the past two years, will not be held this year.

Before the races start a number of roads will be closed for a short period.

From just before 9.30am Marlow Road will be shut between the entrance to Toad Hall garden centre and the roundabout at Northfield End.

This is to allow the 10km runners to go up to Icehouse Lane. Once the last runner has passed, the road will be re-opened.

To allow for the start of the half marathon, part of Bell Street and the whole of both New Street and River Side will be closed.

Henley Bridge will be closed going out of town as will White Hill as far as Remenham Lane, where the runners will turn off.

The organisers estimate the road closures will last about 15 minutes.