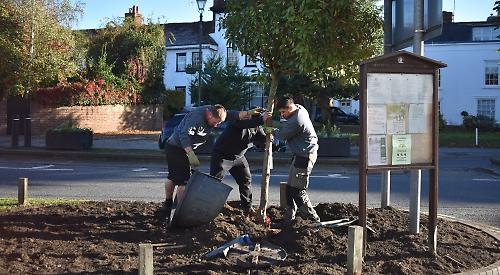 A TREE has been planted at an entrance to Henley to mark the centenary of the end of the First World War.

It is the first stage of a project to improve the appearance of the green triangle in Northfield End, where the Bucks Light Infantry gathered in 1913.

The photinia red robin was planted on Monday by the Big Plant Nursery, of Wargrave, under the supervision of the town council’s parks services team.

The project is a partnership between residents of Northfield End and Bell Street and the council, which owns the land.

Helen Gaynor, of the Northfield End Residents’ Association, said: “We feel it is fitting to commemorate and dedicate the planting of this tree, with its symbolic red leaf new growth, as a permanent memorial to all those who gave the ultimate sacrifice in the Great War.

“It is hoped that it will stand here for another 100 years to tell passers-by of the enormous debt of gratitude to those who valiantly and selflessly gave their lives to secure our future today.”

The 4.5m tree will be dedicated at a ceremony at 11am tomorrow (Saturday) followed by coffee and home-made cakes served in an “army-style” canteen. Visitors should gather at 10.45am.

Mrs Gaynor said the idea arose about 18 months ago when residents complained that the green looked untidy and neglected.

She said: “We started talking to Henley in Bloom about how we could improve it and it has gone from there.

“We’ve always been conscious that there’s a huge traffic sign on a very small piece of green and we were looking at a few ideas.

“We were thinking about using the back of it as a welcome sign but that would be difficult to organise.

“That’s when we thought ‘why don’t we plant a tree’ so that everybody driving or walking into town would see that rather than the back of the sign.”