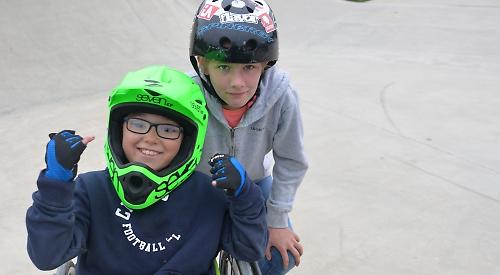 DOZENS of children attended a skating workshop in Henley.

Instructors from ATB Skateshop visited the skate park in Makins recreation ground and gave BMX demonstrations and organised competitions in which youngsters performed their own stunts.

The children took turns to do tricks, including jumps, spins and flips, and were judged by professionals on their execution and complexity. Their families watched from the sides.

The winners were awarded prizes such as sweets, vouchers and skating or cycling products.

The event was organised by the Henley youth and community project Nomad and paid for by South Oxfordshire District Council. Among those taking part was eight-year-old Ben Sleet, who suffers from spina bifida and uses a specialist wheelchair.

Town and district councillor Stefan Gawrysiak said: “It was a great event and everybody really enjoyed it. It was great to see our wonderful skate park being used in this way.”

The £290,000 skate park opened in September last year following years of fund-raising by the town council and the Henley Skatepark Initiative. Another workshop took place in August.