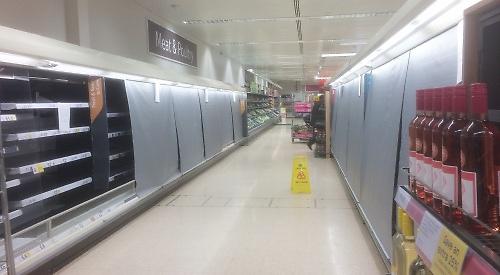 THE roof of the Tesco supermarket in Henley leaked while fridges were out of action due to a fault.

Shoppers had to move their trolleys around buckets that had been dotted around the Reading Road store to catch rainwater that was coming through the ceiling on Friday.

Staff had placed a yellow sign next to each one warning that the floor may be slippery.

At the same time, fridges on both sides of the meat and poultry aisle were out of service because the cooling system had malfunctioned.

Sheeting had been pulled down to cover some of the shelves while signs were placed on the units informing customers that they were out of action for maintenance work.

The fridges are now up and running as normal.

A customer complained to the Henley Standard, saying: “Chillers out of action and buckets lined up like a Dalek invasion force.”

A Tesco spokesman said: “Due to adverse weather conditions last week, we experienced some minor leaks from the roof of our Henley superstore.

“Our colleagues handled the situation quickly and safely and we are now working with our maintenance team to arrange the necessary repairs.

Three weeks ago, the Henley Standard reported how a freezer aisle at the store was out of action for several days due to a fault.

The equipment had only been in place for less than three months.