I like doing things for community, says winner of local hero award 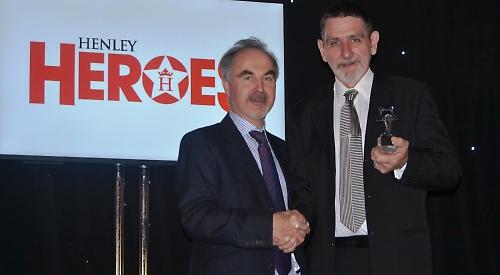 A TOWN councillor who won the local hero trophy in last year’s Henley Heroes awards says he is driven by doing things for the community.

David Eggleton was nominated by his mother Anne, of Gainsborough Crescent, Katie Conroy, of Market Place, Julia Carey, of Reading Road, and Chris Ward, of the Ward Consultancy.

He said: “It is a great honour and it is good people are recognised for what they do in the community. I am sure everybody feels the same way. To be recognised and nominated is an honour in itself.

“The ceremony was unbelievable. There was a nice bunch of people and the atmosphere was amazing.

“I have always helped people and I started the Gainsborough Residents’ Association because I wanted to do something where I live and enhance the area and get everybody working together.

“I started building that up and wanted to go out and do other things in the community. I was asked to be a councillor because of what I was doing.”

He said: “What I wanted to do in the community was make people aware. I believe that other people have taken a leaf from what I have done and attempted their own things.

“It doesn’t have to be massive, it can be anything, whatever is achievable. If you can start small then you can work your way up. I just like doing things in the community. That is what drives me. I see things that need doing.

“Without this awards ceremony we would not realise how many people are doing so much because we don’t actually see it.”

Cllr Eggleton said the awards were also good at raising awareness of the work of charities.

He revealed that he was organising new projects but would not reveal any details.

He said: “I am working on ideas all the time. When you are working with other people, sometimes it takes a little bit longer if you need funding.

“I will keep pushing it until I achieve it. I believe every single thing is achievable.

“You just need the people and the money and then everything is possible.”