I don’t only do impressions... 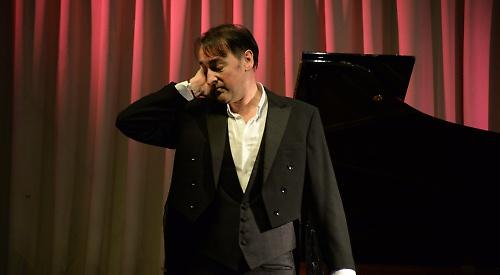 IMPRESSIONIST Alistair McGowan showed off another talent when he performed classical music on the piano for an audience in Henley.

He interspersed each piece he played with witticisms and impressions of various famous people and poked fun at the town’s former MP Boris Johnson.

In the voice of the ex-foreign secretary, he said he did “impressions of the world’s most leading and respected politicians… and Boris Johnson”.

About 300 people attended the event, called Introductions to Classical Piano, at Phyllis Court Club, which was organised by the Henley Festival.

McGowan, 54, star of the BBC’s The Big Impression, reignited his passion for the piano in his late forties, having not touched the instrument since he was in primary school.

He warned the audience on Saturday night: “I’m not a professional concert pianist so it could all go horribly wrong.”

The second piece was by Norwegian composer and pianist Edvard Grieg, who McGowan said had been ridiculed for his height, being only 4ft 11in.

Greig wrote a piece of music called March of the Trolls as a defiant gesture. McGowan said: “It’s a real pianistic fireworks display — I’m not playing that!” Instead, he opted for Grieg’s melody Arietta.

The impressionist recalled how he’d discussed the concept of a stand-up show combined with music with the broadcaster John Humphrys before adopting the Welshman’s voice for his response: “Nice idea but it won’t work”.

His friend and neighbour Gyles Brandreth also passed on some words of advice he had been given from a music teacher: “Piano is an anagram of ‘oh pain’!”

McGowan then played a piece by the French composer Erik Satie, whom he described as “totally eccentric”.

He said: “He wanted to create a new sort of music which he described as the embodiment of the colour white.

“At one point, he ate only white food. He thought if he put white things into his body, white things would come out.

“Satie must have been a nightmare to have over for dinner.”

The impressionist said he had been introduced to Chopin’s music in the late Seventies when he bought Barry Manilow’s single Could It Be Magic — his first vinyl purchase using cash.

“How old does almost every word in that sentence make me seem?” McGowan asked before adding: “My sister said that it’s based on Chopin’s prelude.”

He then impersonated Gary Barlow, singer-songwriter with Take That, who had a hit with a cover of the song.

McGowan made three attempts to play the piece, explaining: “I did tell you it would go wrong at some point. You have to be very careful you don’t go into Madness’s Nightboat to Cairo!”

As he finished playing, he said: “Somewhere in there was Chopin’s prelude.”

He then played a piece from the French film Amelie by Yann Tiersen, saying he was a fan of all things French, including Fred Sirieix of First Dates fame.

“Fred has that wonderful way of looking at his adopted country with an outsider’s eye,” explained McGowan before impersonating the maitre d, saying: “I’ve never woken up on a Bank Holiday Monday with an overwhelming desire to buy a sofa.”

He finished with another piece by Satie, whom he said had been a leader in the French equivalent of the Home Guard in Paris.

As an encore, he played Consolation Number Three by Franz Liszt and said: “His music was incredibly loud. It induced hysteria in a lot of the women in his audience — a little like I have tonight.”

After the show, McGowan told the Henley Standard: “It was lovely — I wasn’t expecting quite such a fantastic crowd.”

Stewart Collins, the festival’s artistic director said: “He’s a very funny man and he’s actually doing something brilliant that we didn’t expect of him and completely charmed the audience.”