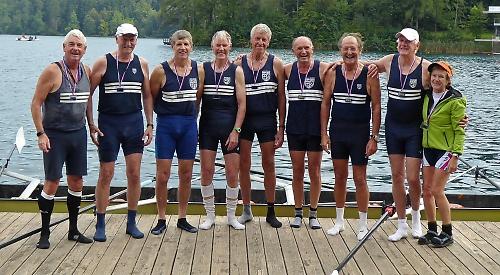 A VETERAN rower has thanked his colleagues for saving his life after he suffered a near-fatal heart attack on the water.

Bill Evans only survived thanks to the swift intervention of his crewmates and the club’s automatic defibrillator.

The 71-year-old, of Western Road, Henley, was in the bow seat of an Upper Thames Rowing Club men’s eight when he suddenly collapsed near the end of an hour-long training session on the Thames.

The rest of the crew noticed immediately that the boat had slowed down so they raced the final 500m back to the clubhouse off Remenham Lane as quickly as possible.

When they arrived club captain Justin Sutherland was waiting on the bank.

Mr Evans was not breathing and had turned pale so Mr Sutherland leapt into the boat and performed cardiopulmonary resuscitation to keep oxygen flowing to his brain.

After calling 999, the rest of the crew, led by Mike Dudley, hauled Mr Evans on to the bank and took turns at giving CPR until he started to breathe intermittently.

He suffered eight cracked ribs in the process.

First aid trainer Flora Schnider, who had been giving a training session on CPR and defibrillator use at the club, then stepped in and used the club’s device, which was installed last year.

She continued giving compressions with help from club member Daniel Sadler, a former headteacher of Chiltern Edge School in Sonning Common, until an ambulance arrived to take Mr Evans to hospital. Ms Schnider, from Brighton, said: “The immediate reaction of the crew was exemplary.

“We had a quick debrief afterwards to check that everyone was okay and I told them they had probably saved Bill’s life, although even after the ambulance had left I had my doubts.

“His recovery is a minor miracle as only about five percent of people survive in these circumstances.

“The absolute priority is to keep the brain supplied with oxygen by performing chest compressions until help arrives and that is exactly what they did.”

Mr Evans was taken to the Royal Berkshire Hospital in Reading, where surgeons found a blockage in a blood vessel supplying his heart which they fixed by installing a stent, a type a mesh tube that holds it open.

The operation only took 22 minutes as they were able to push the stent through a vessel in his arm rather than opening his chest but he had to be sedated for 48 hours afterwards.

He then spent eight weeks in rehabilitation where he had to undergo exercises to rebuild strength in his heart and in his leg muscles, which had stopped working because of oxygen deprivation.

Now he walks around the Henley area with his wife Marion every morning and rests in the afternoons.

Mrs Evans said: “I spent some time with the paramedics that morning and they left me in no doubt that the swift and effective actions of the people around Bill saved his life.

“He was lucky to be in an eight with seven strong men to help him.

“He’d been out in a single scull the day before and they said it would have been a different story if it happened then. Even a four would have proven difficult so in a way it was the best possible time.

“I’m also grateful for the excellent care he received at the hospital.

“Bill led a very active lifestyle so they said it came down to family history. It was always going to happen and would have been years earlier if he hadn’t taken such good care of himself.

“It came on without any warning — he was coughing a bit in the minute or two beforehand and then he just collapsed.”

Although Mr Evans has not yet fully recovered, he can exercise on the club’s static bikes for up to 15 minutes once or twice a week.

His wife said: “He can do some cycling on the exercise bike but his main rehabilitation is just walking.

“We managed one-and-a-half hours the other day, although his balance still needs to improve as he was knocked over by an over enthusiastic Labrador puppy.

“The support from the Upper Thames rowing ‘family’ has been immense both during his stay in hospital and since being discharged.

“Last Sunday we went back to the spot where it happened and said our thanks for still having a husband, father and grandad.”

Mr Evans, a training consultant, took up rowing at age 18 when he was a student at the Rutherford College of Technology in Newcastle.

His interest waned when he and his wife, who are both from Durham, moved to Henley in 1974 but he took it up again after joining Henley Rowing Club in 1992.

He moved to Upper Thames about five years later and has been part of numerous winning crews, including a men’s coxed four which won the H and J categories at the European Masters Regatta in Munich last year.

Mr Evans, who ran the London Marathon last year, does not know whether he will be able to row competitively again but hopes to at least do it recreationally.

He said: “I have no recollection of anything between the day before it happened and about a week afterwards.

“I had to do a lot of physio and although I’m not ready to run the marathon, I’m back on my feet. I could barely do 50 yards when I first came out of the hospital but now I’m up to a couple of miles.

“It really feels like the stars were aligned in my favour as I had a very capable crew around me and the defibrillator course was happening at that exact time.

“Everyone has been amazing — there were loads of cards from members and lots of them came to visit.

“It’s so good to be back at the club again and to be part of such a supportive community.”

The Upper Thames defibrillator was the 60th to be installed as part of the Millie’s Dream appeal following the death of David Church, who suffered a cardiac arrest and died on one of the club’s rowing machines in June 2017.

The club introduced CPR courses after Graham Smith, another member, suffered a fatal brain haemorrhage during an outing in December and has also hosted a talk by Will Orr, a cardiologist at the Royal Berkshire Hospital.

Mr Sutherland, who is a candidate in next week’s Henley Town Council elections, said: “Our members, myself included, enjoy nothing more than going for a row with their friends and competing is a part of that.

“We understand that exercise brings risks but so does not taking exercise.

“Although we know we are not going to win the Olympics anytime soon, we are generally of the view that getting on the water, spending time with friends and keeping fit is preferable to whatever risks sport may bring.

“We’re just thankful that this time there was a happy ending and it's great to have Bill back.”

Millie’s Dream which was launched in 2013, by Sarah Roberts after her daughter Millie, now 11, was diagnosed with a heart and lung condition.

He aim was to raised enough money to supply defibrillators to 10 local schools but the appeal has been so successful that there are now almost 60 devices at various buildings, including businesses, halls and sports clubs.

Mrs Roberts, of King’s Road, Henley, said: "It's fantastic that they were able to save Mr Hughes' life and it's thanks to the generosity of the Henley public that we have been able to provide 67 defibrillators in and around the town.

"However, there are still 'black spots' where, if someone collapsed, they would be outside the eight-minute limit for someone else to find one and begin using it. I believe that we really need 100 to maximise coverage.

"This could also have ended differently if people had not known CPR and I would encourage as many people as possible to seek training. You're never going to feel completely confident in the event of an emergency but any intervention will make a difference."