Owner gets back final piece of her stolen skiff 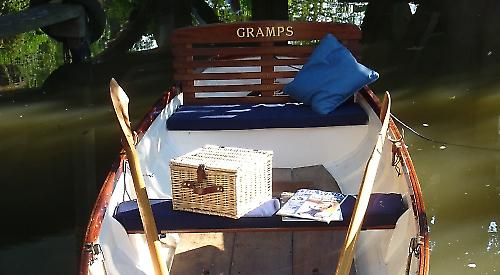 GILLIAN NAHUM is thrilled after getting the last part of her stolen boat back — with a little help from the Henley Standard.

The owner of Henley Sales and Charter was devastated when the 16ft wooden skiff was stolen from amenity land by the River Thames off Wargrave Road, Henley, in December.

The thieves rowed the boat upstream to Marsh Lock and then stripped it of its accessories.

The vessel was recovered a couple of weeks later but was full of water due to rain and was missing its oars, rowlocks and the antique seatback.

Last month, I told how the oars had been found by Enid Light on the roof of her garage in Wargrave Road.

Now the antique seatback has been found too.

It is made from varnished mahogany and has the words “Gramps” written on it in gold leaf in memory of Mrs Nahum’s father Ralph.

It was found on the river bank at Henley Business School by Alan Ranger and his son as they were sculling on the river on Easter Saturday.

Mrs Nahum, of St Andrew’s Road, Henley, said: “They knew, because of the Henley Standard story, my skiff had lost its various components.

“They brought the seatback back to Henley and they rang my husband but he didn’t tell me. Then the doorbell rang and he said, ‘I think you should go and get that’.

“I ran downstairs and there was Alan, who I know reasonably well because his wife Jill used to work for me, and he was holding my seatback.

“I was absolutely thrilled — I didn’t think I would see it again.

“I think it had probably been thrown into the river and just floated downstream.

“Judging by the condition of the varnish it must have been in the water for months. However, a quick rub down and a few coats of varnish at our boatyard and it will be as good as new.

“It’s a brilliant result and just shows the power of people with local knowledge keeping their eyes open for things. Without the piece in the paper there’s just no way this would have happened.” Mrs Robinson Ranger, of Gravel Hill, Henley, is already a nominee in the local hero/community hero category of the Henley Heroes Awards, which will be announced tonight.

Mrs Nahum’s father died in 1998 and she bought the boat a year later as something for her two children to remember him by.

The old punt seatback was rebuilt by Colin Henwood, of boatbuilders Henwood & Dean, and shaped to fit the boat.

It is thought to have been stolen on December 13. After the skiff was abandoned by thieves it was found by Ed and Annie-T Simons, of Wargrave Road, who saw it was filling with water during a downpour so stored it in their boathouse in the hope the owner would reclaim it.

Mrs Nahum learned this when she attended a party at the Simons’ house and was delighted to get it back.

She had resigned herself to losing the seatback and oars until late March when she received an email from the Simons’ neighbour Mrs Light saying she had found the oars.

Mrs Nahum said: “Now my skiff is whole again — I’ve got the boat, the oars and now the seatback back. It was an amazing Easter present!”

She hopes to have the skiff refurbished in time for use during Henley Royal Regatta in July.