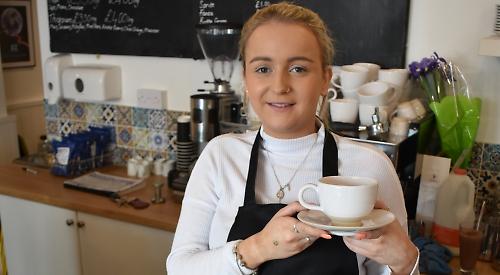 A NEW luxury shoe shop has opened in Henley and a coffee house has re-opened under new owners.

It is the second outlet for Claudia De Biasi and Michele Langenbrinck who opened their first shop in Amersham in 2015.

The pair met in 2003 while working in Mayfair and started their own styling business in 2011 before expanding to provide Italian-made shoes the following year.

Mrs De Biasi, who was born in Brazil, said: “We found our clients couldn’t find comfortable, stylish shoes without the crazy Mayfair prices.

“We are bringing the best of Italy without the Mayfair prices.

“Our first shop has been the biggest success we could have dreamed of. We have customers from London and the Home Counties and also work with podiatrists for people with difficult feet. We have always liked Henley — it was actually our preferred choice when we were looking to open the first shop. We used to come over on weekends.”

The new store was officially opened on Thursday last week following a refurbishment.

Miss Langenbrinck said: “We wanted to open in March but we had some delays. We had to do a bit of work inside, which needed a bit of TLC. We love Henley and are really excited to be here. A second shop is a big step for a business and we hope to be as successful here as we are in Amersham.”

Meanwhile, the Henley Coffee Shop has taken over the former Scene 1 Take 1 café in Bell Street, which closed in March.

The business is being managed by 20-year-old Annabel Bennett, from Abingdon, on behalf of her friend Darryl Wild. The film-themed interior created by the previous owner Sebnem Bamsey has been retained.

As well as hot drinks, the business sells sandwiches and paninis, milkshakes made with ice cream and chocolate bars and smoothies.

Miss Bennett, who has managed Coffee Aroma in Abingdon for the past two years, said: “The shop is the same as before but what we sell is completely different. I’ve carried that over from my previous shop.

“I’m very excited and people have made me feel welcome.”

She is confident of being able to hold her own against the competition from Henley’s many other coffee shops.

Miss Bennett said: “I park at the rugby club and people walk past here to get into town, so I think it’s in quite a good spot. I feel like you get the locals and the regulars here rather than visitors.”

Ms Bamsey, a former actress and singer, opened Scene 1 Take 1 in October 2017.She signed a four-and-a-half year lease on the premises, which was previously a florists.

She decorated the café with modern and classic film posters, which reflected her love of musicals, as well as a green guitar.