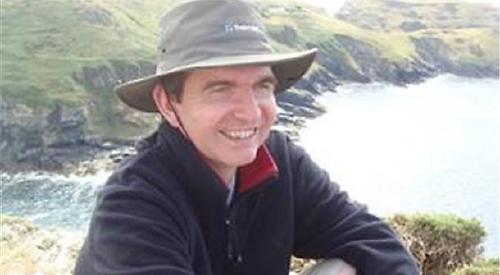 SIMON was born and raised in Wickersley, South Yorkshire.

His father George and both his grandfathers worked for British Steel while his mother, Gill, worked as a medical secretary at Rotherham Hospital. He had a younger sister, Alison.

As a family, the Cuthberts attended Wickerley Methodist Church and Simon played the bugle in the Boys Brigade.

As a teenager, he discovered Isaac Asimov and the world of science
fiction, which developed into a fascination for science.

He excelled academically and was the first member of the family to go to university — Simon’s parents were immensely proud.

He considered doing a PhD in astrophysics researching black holes but opted instead to train as a physics teacher, completing his postgraduate certificate in education at Hild-Bede College, Durham, in 1987.

Simon then devoted more than 30 years of his professional life to working at The Henley College.

He joined the college in September 1987 as a physics teacher. He enjoyed classroom banter and loved watching students grow and develop their gifts. He was a dedicated teacher, determined to do all he could to enable students to fulfil their potential.

He went on to become head of physics, head of science, head of faculty and deputy principal.

He also served as a governor at Chiltern Edge School in Sonning Common and Cressex Community School in High Wycombe.

Simon’s sharp mind, analytical brain, optimism and supportive approach were qualities that won him much admiration.

He had a passion for excellence in education and for inclusion, believing that a good education should be a right for all rather than a privilege for a few.

Simon’s professional, calm and friendly manner earned him respect and affection across the staff community and he was known as a man of great wisdom, principle, compassion and fairness.

He was a good mentor, keen for his colleagues to flourish and develop in their own roles and careers.

College principal Satwant Deol said: “The news of Simon’s death has been felt deeply across the college and he will be missed dearly by the many staff and students who knew him well.

“There are many colleagues both past and present who have expressed their sense of loss.

Simon made me feel most welcome at Henley and I am very grateful for the significant contribution he made to the college over the years.

“Our thoughts and sympathies are with Simon’s family at this difficult time.”

Simon had a strong interest in history and politics and was passionate about social justice.

He loved all sports — mostly watching rather than playing — and was a lifelong supporter of Leeds United Football Club.

He was also a man of faith. Though an atheist through his teenage years, he revisited the claims of Christianity while at university and found himself being drawn by the character and teaching of Jesus.

He committed his life to Christ at a Billy Graham rally at Bramhall Lane Football Ground in Sheffield in June 1985 and from that point on God became the foundation and motivation of his life.

Simon had no difficulty reconciling science and faith, believing that the complexity, diversity and beauty of the universe pointed to a creator of infinite power and imagination.

His faith brought a richness and purpose to his life and sustained him through times of adversity, not least through his seven-month battle with pseudomyxoma peritonei, a rare abdominal cancer.

Simon was happily married to Penny, whom he met at Greyfriars Church in Reading when he first came “down south” and they discovered they had both been at Durham University.

Simon was a dearly loved son, brother and uncle, a faithful and devoted husband, who was fully supportive of Penny’s vocation as a vicar, and a loving father to the boys, of whom he was immensely proud.

The Henley College has opened a book of condolence in which former staff are invited to write their memories of Simon at the Deanfield campus reception.

If you would like to contribute but are unable to visit the college in person, please email your message to marketing@henleycol.ac.uk