Council to sell land for flats 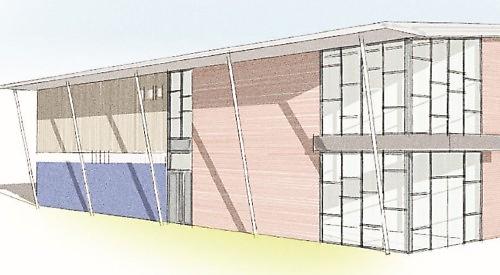 LAND owned by Henley Town Council is to be sold and redeveloped for housing in order to fund new sports facilities.

About 35 flats would be built on the 0.9-acre site, which is next to Tesco, off Reading Road, and currently has a number of different uses.

The council plans to spend the money it receives from the sale on a new clubhouse, 3G pitch and a new depot for its parks department, which would cost a total of more than £4million.

The council says it would seek grants to pay the likely funding gap.

Developer T A Fisher, of Theale, has agreed to replace the clubs’ current facilities in return for being allowed to redevelop the land.

Public consultation on the proposals will begin tomorrow (Saturday).

The land was earmarked as suitable for around 30 homes in the joint Henley and Harpsden neighbourhood plan, which was approved at a referendum in 2016 and is currently being updated.

At present, it has facilities for the two sports clubs, the No Limits gym and changing rooms for use by people using the artificial pitch on Jubilee Park across the entrance road to Tesco as well as a workshop and storage yard for the parks service staff.

The council rents out the buildings but says they are outdated and in need of replacement.

The new two-storey clubhouse would overlook the playing pitches at Jubilee Park and would make it safer for users as the parking, pitches and facilities would then all be on the same side of the road.

The building would have changing rooms, toilets, showers, storage areas, a first floor social area with kitchens and a bar plus a viewing deck.

Forty per cent of the new flats would be “affordable”, in line with South Oxfordshire District Council’s planning policy, and there would also be two shop units.

Henley Mayor Ken Arlett, who is chairman of the council’s planning and neighbourhood plan committees, said he hoped that contracts would be signed in the next four to six weeks and then a planning application submitted.

He said: “The facilities are going to be much better than what they have got at the moment, which are 20 years old. It’s going to give you a clubhouse that’s going to be there for another 50 years.

“The only problem is the lack of sports land but to overcome that they are going to build a 3G or 4G pitch. You can play on that 24/7 if you want.

“At the moment they play so many matches on the pitches that they are wearing out.”

Councillor Arlett said the council was looking at a new sites for the parks depot.

He said the project would “just about” break even without the 3G pitch but this would generate
revenue.

The council would seek grant funding from the Football Association and the district council in order to meet the shortfall.

Cllr Arlett said: “I think it’s viable. The more I’ve got involved in it, the more I want to make it succeed.

“I would be amazed if anybody was to go against it. You’re offering affordable housing and new sports facilities. If we don’t get 99 per cent support I would like to know the reason why. There’s no reason why it shouldn’t move forward from here. Hopefully, by this time next year, someone will put a shovel in the ground.”

Chris Baker, president of Henley Hockey Club, said: “We have been talking about this for an awfully long time and we would just like to see a bit of movement on it.

“As a club, we’re very excited about potentially having a new clubhouse overlooking the Astroturf pitch. The existing building is getting a little rough around the edges.

“To build something which is pretty futuristic and will take the club forward — we have a lease until 2054 — does show an intention to grow the club.”

Trevor Howell, chairman of AFC Henley, said: “It was our suggestion that they sell the land about five years ago. We believed it was the only opportunity we had to get a new clubhouse. The whole idea of it being a community facility is quite important and to get some activities going on there.

“There are quite a few challenges ahead of how it’s going to be organised and managed and ongoing funding but we’re positive that it will be a very successful venture for all of us.

“As a football club, we’re delighted at the prospect of having some facilities on the grass right next to the pitches rather than having to take children across the road..”

Mr Howell said he had more than 300 youngsters from under-nines to under-18s playing league football with AFC Henley and more than 100 children at its mini-soccer centre on Saturday mornings.

He welcomed the prospect of a new 3G pitch, saying: “The main role is it gives us capacity which we can’t get from the grass because you can play on it non-stop, all day, every day, so you’re not restricted by issues of wear and tear. You can play matches or have training at any time in any weather.”

The site is the largest piece of suitable development land owned by the council.

The neighbouring four acres were sold by the council to Tesco for £4million and the supermarket giant was granted planning permission for its store in 1993.

Residents can find out more about the proposals and give their views at a stand in Market Place from 10am to noon tomorrow (Saturday), at Tesco from 10am to noon on June 15 or at the information centre in the town hall on weekdays from Monday until Friday, June 21 from 9am to 4pm.